IO, the app of the Public Administration becomes a reality 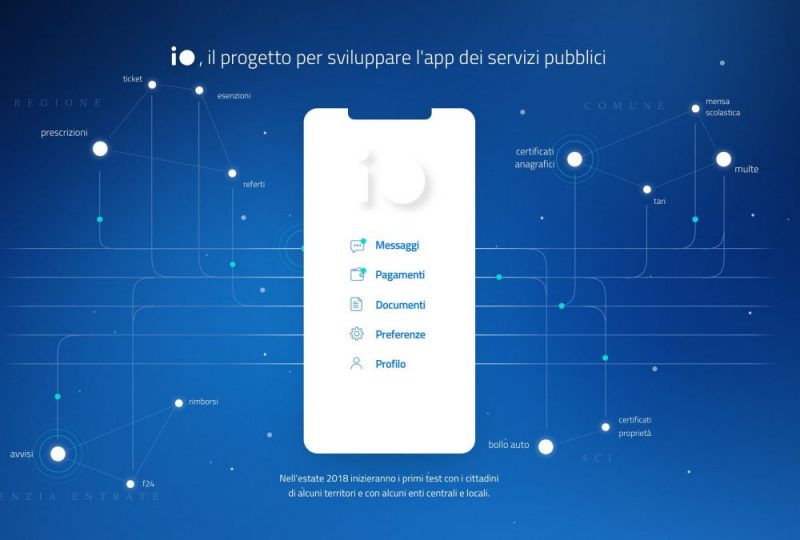 It would seem to be the right time for the digitization of Italian public services: the Digital Transformation Team, in collaboration with AgID, the Italian Agency for the Digital, has announced the birth of IO, an app of the public administration that will be tested in the coming months.

Structured as a single digital environment in which to collect and manage all relations with the public administration, the IO app promises to do a lot to simplify our daily battles with the bureaucracy: the application will work as a hub to organize information coming from digital systems of individual administrations, which will be managed directly on your smartphone. Diego Piacentini, former manager of Amazon and close collaborator of Jeff Bezos, appointed in February 2016 Extraordinary Commissioner for the implementation of the Digital Agenda by the Renzi government, as part of the three-year plan for information technology in the public administration, is among the leading names of the project. “The app will drastically reduce the time of the citizen’s obligations towards the Public Administration. With a system of notifications, payments and deadlines, in a few minutes you can carry out operations that previously took much longer”, Piacentini said in an official statement.

How does it work

For the moment, a preview of the application and of the details of the services it offers is available on the io.italia.it website. As is shown in the preview, IO will allow the integration of other systems already in operation, which will all converge in the app of the public administration, simplifying the work of the public administration, as well as the experience of the citizen. “We are working on enabling platforms, on the components necessary, but not sufficient, to make the app fully operational,” explained Piacentini again. “The ANPR, the unified registry, will allow to synchronize all the data of the citizens who are currently scattered in about 8000 different registers, SPID will guarantee a secure and unique access, PagoPA, the new payment system, will become the engine of the app’s digital wallet”.

To access the app’s services, it will be necessary to have a SPID, a Digital Identity Public System, which will guarantee that each account is connected to a single physical person. The app will also allow you to set a PIN or fingerprint recognition on compatible smartphones to make access to IO services even faster.

IO will be divided into three main sections (Messages, Portfolio, Documents), plus the one dedicated to managing personal profiles:

Messages: in this section all messages and communications from the public administration will be collected, also activating a push notification function on the smartphone. From here it will also be possible to receive or send documents or certificates from the competent offices.

Portfolio: payments to the State can be made directly within the IO, thanks to the PagoPA system. Users can register their credit card, or associate services such as PayPal and Satispay to their account. From the app you can also pay the paper bills provided with a QR code.

Documents: this section will act as an archive for receipts of payments and for the certificates obtained by the public administration. The app will allow not only to view, but also to share documents with other institutions, if required.

The advantages for the Public Administration

Although IO is designed primarily to solve the difficulties of citizens, according to the managers it will also be helpful for the public administrations. The app, in fact, thanks to the integration of PagoPA, ANPR and SPID, will provide most of the functions common to all public institutions. Advantages that hopefully can be implemented at multiple levels, considering that the project is open source: the public administrations will be able to participate in the development of the platform, proposing modifications or implementing some application modules. “IO is an open project”, says Matteo De Santi, UX / UI manager & Product Design of the Digital Transformation Team, “any public body can participate in the experimentation, and actually it is invited to do so. IO is designed with an open source logic, so the whole process of realization of both the app and the infrastructure is completely public, and anyone can see how we are carrying it out and decide to help us. Furthermore, the Digital Transformation Team is using technologies and methodologies that we hope will constitute best practices for all the digital services of our country “.

As already mentioned, a preview of the project is available on the io.italia.it website, but IO is not available in the app stores yet. The Digital Transformation Team and AgID, the Italian Agency for the Digital, co-creators of the project, have stated that as early as summer 2018 some local and national services will be provided through the app. In this period, in fact, tests will be carried out with the citizens of some territories and with some local and national public bodies.

Although it is premature to say if IO can really be the solution to our daily problems with bureaucracy, the application has certainly taken giant steps in the field of digitization and simplification of public administration compared to the past. There are still a lot of unknowns, however, especially in the political field: the project had the support of both the Renzi and Gentiloni governments, but during the last election campaign the issue of the digital implementation was not addressed by the political groups now in charge. The Digital Administration Code, in any case, provides guarantees to what has been done so far.