Transforming the 4th industrial revolution in a new Italian Renaissance 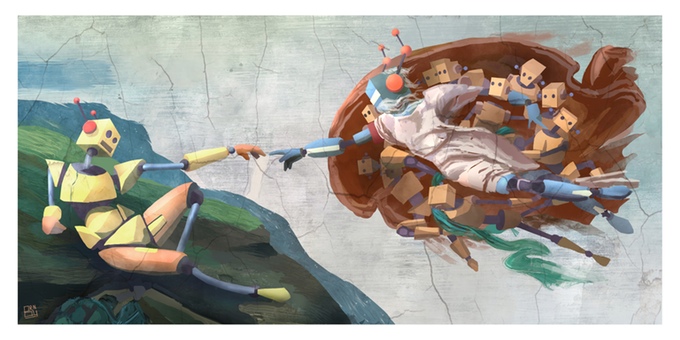 The future of work and education in Italy

Italy is a Democratic Republic founded on WORK.” Thus begin the Italian Constitution. Today we live in a world where the paradigm of work has changed and is changing dramatically.

My grandparents, born in the early twentieth century, have studied up to about 25 years of age, both lucky enough to go to college, they then made a lifetime’s job, the one for which they had studied, rarely changing employer.

My dad, born in the early fifties, he also studied up to 25 years of age and has changed employer sometimes more, but always doing the same job for which he had studied.

I’m 35, I studied Economics at Bocconi University and I started working as a management consultant at Arthur D. Little. After about two years I became an entrepreneur and I created, together with my business partner, Wish Days, a company that became famous for Emozione3 gift boxes and for the exit, being sold to the Irish competitor Smartbox, 10 years later, in 2016. Today I still have reinvented my job creating an organization, Impactscool, which brings free training and discussion for students, and more generally to the public about new technologies and the impacts they have in society, and I came back on books enrolling in Philosophy at Verona University and at Scuola Holden, school for writing and storytelling.

Not only have I changed employers but also the sector, each time and every time, but also job, every time. And again I will change, like it or not, who knows how many times in the future. For the next generation, even more: you will find not only to change jobs many times, but also to have multiple sources of income at the same time because of the huge changes sharing economy is leading to.

How to cope with a reality like this and follow, once again, the words stated in the Italian Constitution inviting us to recognize for all citizens the right to work by promoting the conditions that allow it (art. 4) and to protect the work and its forms, to supervise the education and elevation of citizens (art. 35)? What are the tools that enable citizens to exercise the right to work in this new environment? What kind of training we need to make available to everyone?

Despite having done much, we are still behind in Italy with respect to these trends and we must do more, also because the situation is much more complicated than that. In addition to these trends, in fact, already in itself disruptive, we are to see a change dictated by the advent of new technologies, which has no parallel in history: we face the fourth industrial revolution.

The automation deriving from the application of robots and increasingly intelligent algorithms to work, will change the rules of the game in a few years, and will do so sparing no job and no industry. If not by replacing human workers, it will in any case change the scenario by placing side by side humans and machines and thus requiring new skills nonexistent today. A recent study by McKinsey, the famous international consulting firm, showed Italy between the country that will be most impacted by automation.

Does not mean that we all will be out of work, but certainly that the skills required of workers will change dramatically and this will be a problem both for workers who will find themselves in the struggle to relocate if they lose their job, and for companies that will find in the market a lack of resources they need to remain competitive in this scenario.

The timing of these technologies hitting the market massively is so fast that does not allow society to adapt by creating new skills through the traditional school system and allowing time for a new generation to get educated and ready to the new reality. It is not only a problem related to how to train young people to prepare them for jobs that do not exist yet, it is also a problem related to adults who will find themselves unprepared for the change and without the flexibility and the habit of continuing education and study, still tied to old paradigms.

Facing this scenario Bill Gates proposes a tax on the work of robots, as if they were employees, Elon Musk (along with many others) supports the idea of ​​a basic income for those who remain out of work, and the debate between positivists that lights up they believe that automation can free humanity from work and allow them to engage in intellectual and creative activities as never before in history, and who, instead, sees in this future a catastrophe of enormous proportions for humanity. And the proportions are enormous, because the impact of technologies such as artificial intelligence, 3D printing, nanotechnology, robotics etc, cut across and permeate all areas of our lives.

But these impacts, however important, will be neither catastrophic nor utopian. But we have become aware and to prepare ourselves.

We are facing what I like to call the Superman Dilemma: imagine you are Superman in 2016. Compared to a few decades ago, the world has changed a lot. Among other things, mobile phones have spread, and you have no longer a safe place to change you to save citizens in distress. Yes, an unexpected impact of a technology that you thought you would not have been impacted by, prevents you today to do your job. You are now faced with a dilemma: you also use a cell phone, maybe a smartphone, and discover that you can download an app for car sharing to locate a car nearby and change you on the inside; or stop saving the world and lose your job. That is, you can choose to live with the change and understand how to react to the new reality, or suffer it. This applies to many sectors: cargo transport are threatened by 3D printing that promises to produce everything locally, manufacturers of street signs are threatened by autonomous cars that do not need a sign to know the direction. And so on.

We need consciousness of change.

We need knowledge of these technologies and understanding of their impacts.

We need new skills that allow us not to be crushed by the change.

On one side we need capabilities embracin the holistic dimension such as empathy, interpersonal exchange, the ability to express emotions; typically human characteristics, which cannot, at least for a while, be replaced by a machine. On the other side critical thinking, philosophy, storytelling; for the best possible interaction with machines and with other human beings.

Italy is facing not a threat, but one of the greatest opportunities that has ever happened to it in history. It is facing a future where typical features of the Italians will be rewarded, feature that are part of our DNA: curiosity, creativity, entrepreneurial spirit, flexibility and adaptability, culture; we are facing a future where we can restart from our excellences as design, robotics, industry, food, fashion and many other and give birth to a real Italian Renaissance.