From the melting of ice in Greenland to the fires in Siberia, human emissions of greenhouse gases have set in motion a series of self-sustaining processes with serious consequences for all of humanity. We try to understand what these processes are and, through the latest IPCC report, what to expect in the coming years and what we can do to mitigate the damage. 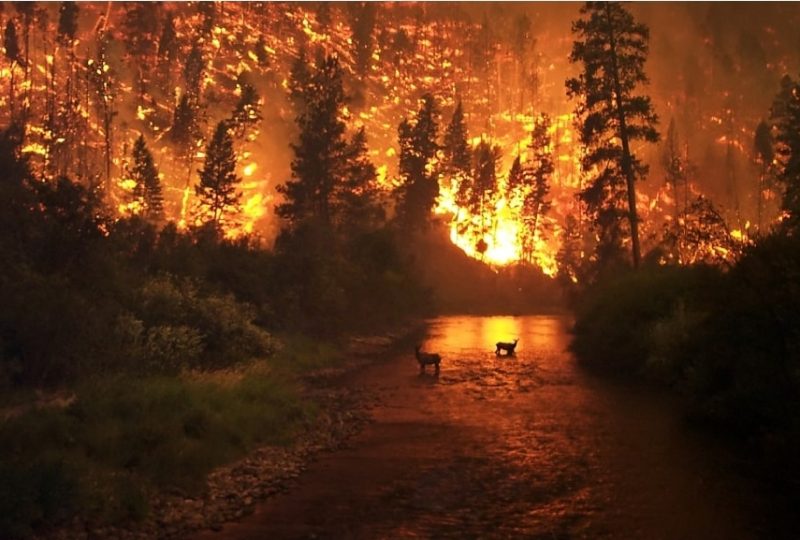 4.3 million hectares are on fire, an estimate that rises as you read this article. This is the terrible fire that is devastating Siberia in these days, a forest area the size of Denmark has gone up in smoke. And this is just one of the most serious consequences, smoke. The fire is releasing as much CO2 into the atmosphere as the entire Belgium produces in a year. A further blow to the already critical climatic situation of our planet whose consequences, according to a recently published report by the IPCC, Intergovernmental Panel on Climate Change, will be very serious and, above all, imminent.

Siberia in flames. The fires that are devastating Siberia have been going on for weeks now. The intense heat of the past few months has allowed the fires, probably triggered by lightning (even if rumors of the corridor still to be confirmed speak of arsons), to spread uncontrollably. The reason for this ferocity and speed of diffusion is to be found in the greater quantity of dry plants and in the very slow response of the Russian authorities, slowed down by the remoteness of that territory. This fire, consisting of so many minor fires, is releasing an enormous amount of CO2 into the atmosphere, it is estimated that it has emitted over 160 million tons, almost as much as Belgium emits in a year. In addition to CO2, a huge amount of fine dust, a gray cloud visible from satellite, derived from the combustion of wood, the so-called black carbon, dark ashes that, transported by the winds, reaches further north in ice-covered areas where it starts a feedback process that will worsen the situation. 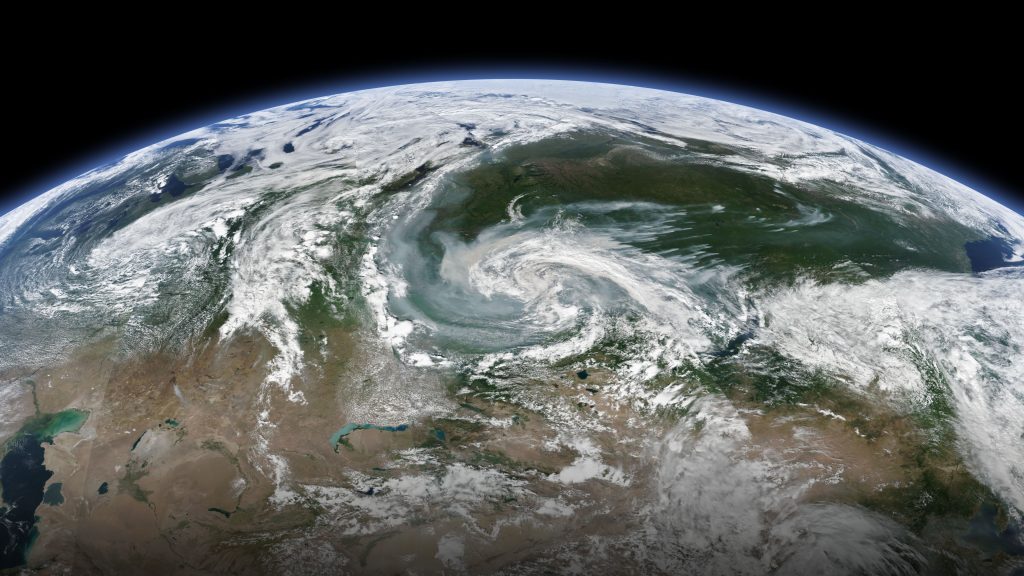 Feedback processes. The climate of our planet, at least what we are used to, is in a delicate and temporary balance but in recent decades, due to the enormous quantity of greenhouse gases that humanity has released into the atmosphere since the beginning of the industrial age, this balance is at risk. The processes that partly manage this balance are very susceptible to even the smallest variations, triggering mechanisms called feedback which, as in a vicious circle, feed on themselves until they get out of control. The entire terrestrial ecosystem is influenced by these processes and some of these particularly affect the climate, with complex and sometimes even counterintuitive effects and consequences.

Ice feedback. Ice plays a very important role in managing the balance of our planet’s climate: unlike its liquid form that easily absorbs the heat of the sun, ice is white and reflects a lot of light and therefore heat from our star. The rise in temperatures decreases the amount of surface ice (just think of the situation in Greenland where the intense heat is dissolving huge quantities of ice). Less ice means more exposed soil or water and therefore greater heat absorption, which in turn means an increase in temperature and therefore we return to the starting point of this cycle and the ice decreases more and more. This process does not end on itself, as we have mentioned before, the consequences are complex and interact with other feedback processes.

For example, more melted ice means less salinity in the oceans which strongly affects marine ecosystems. Furthermore, the melting of the continental glaciers leads to a rise in sea level, with risks for coastal cities all over the world. Still, the warming of the oceans provides another example of a self-feeding mechanism. The oceans are an important reserve of CO2 as they dissolve it in surface waters. However, the ability to retain CO2 in water depends on the temperature of the water itself: the colder the water is, the more CO2 it can store. If the surface temperature of the oceans increases, the amount of CO2 released into the atmosphere also increases; this, in turn, amplifies the greenhouse effect by reflecting itself in a further temperature increase.

Forest feedback. Returning to the destructive Siberian fires, the consequences of what appears to be the most massive fire of the last 10 thousand years will affect many other feedback processes. For example, the dark ashes due to the burning of wood will be deposited on the northernmost ice, in the Siberian tundra, making it darker. In this way the ice will absorb more light and then heat up, melting. The ground below will then be discovered, which has a greater capacity to absorb heat, accelerating the effects of the process.

It almost seems like a game of Chinese boxes: when one opens inside, another one appears, and so on infinity. Another problem is that burnt trees will no longer be able to absorb the CO2 present in the atmosphere. Among other things, the current climate changes end up causing a greater quantity and intensity of extreme events, therefore a greater probability, in the event of lightning storms and strong winds, that other fires will be started.

Methane. CO2 is seen as the number one enemy when it comes to air pollution and the greenhouse effect, but the gases that actually cause it are many. Methane, in fact, is another protagonist of this disaster. The peat that covers the soil of these burning forests, releases an enormous quantity of methane into the atmosphere, as well as other released from permafrost, the perennially (in theory) frozen ground: by dissolving all the organic material blocked inside it emits large quantities of this gas that are added to those released by other processes.

The feedback processes are innumerable and linked to each other, once the balance is broken, being able to go back is difficult, if not impossible. Climate change is not something to come, we are experiencing it right now, we can no longer prevent, what can be done is try not to make it worse and, above all, prepare to face its consequences. This may be helped by the IPCC report published on 8 August.

The consequences of climate change according to the IPCC. The new report places emphasis on the use of the land in particular of the cultivable land. Agriculture, together with forestry and other uses we make of the land are responsible for 23% of greenhouse gas emissions. Putting into practice better production processes will be essential to stay within the 2 °C rise in global temperature, a limit that would allow us to mitigate the impacts of the climate crisis and to manage the changes underway with relatively little damage.

In this sense, there are two important points: the degradation of the soil and the waste of food. To date, one-third of the food we produce is thrown away, this means that a third of the greenhouse gas emissions deriving from food production can be reduced with a greater production and consumption efficiency. Being able to find the most effective practices and methods of management, distribution, and access to food will be essential not only to combat the climate crisis but also to help overcome hunger in the world.

The soil in which we grow our food, however, goes treated with the same care: soil degradation is one of those negative feedback cycles which, if interrupted, could counter global warming. The degraded land, in fact, produces less food, so to produce more we are forced to use more land, eroding the forests, as is happening in Brazil where the deforestation of the Amazon, under the Bolsonaro government, has accelerated. Fewer forests mean less CO2 absorption. Furthermore, degraded lands are more likely to undergo desertification processes. It is currently estimated that 500 million people live in areas of desertification, a risk that also affects our country.

Desertified areas are more prone to extreme events, such as droughts, heatwaves, and sandstorms. These processes will lead to an increase in domestic and foreign migration in the coming decades. In particular, it is estimated that at least 140 million people will have to leave their lands. The most affected countries are in Africa, Asia, Latin America, and the Caribbean. Extreme weather events can in fact lead to the breakdown of the food chain, threatening the standard of living of these areas, increasing the risk of conflicts. The global geopolitical balance is strongly influenced by climate change, by facing them we can prevent disastrous consequences, not only environmental but also social, political and economic.

According to some estimates, which accelerate more and more to the downside, we have 11 years to put a patch and try to avoid disaster for all humanity. The time has come to act. Putting into practice ways that reduce food, and energy waste is the first step, the next is to ask governments and large companies to take action before it is too late. It is often said that climate change poses a serious risk to our planet. But the reality is another. Our planet is doing very well, it has survived five mass extinctions, meteoric impacts, and ice ages. Our planet is not at risk. It is we humans and our civilization that are on the brink of an abyss.