What’s going on in Australia

Australia has been engulfed by flames for months, between record temperatures, terrible fires, climate crisis, and controversial images 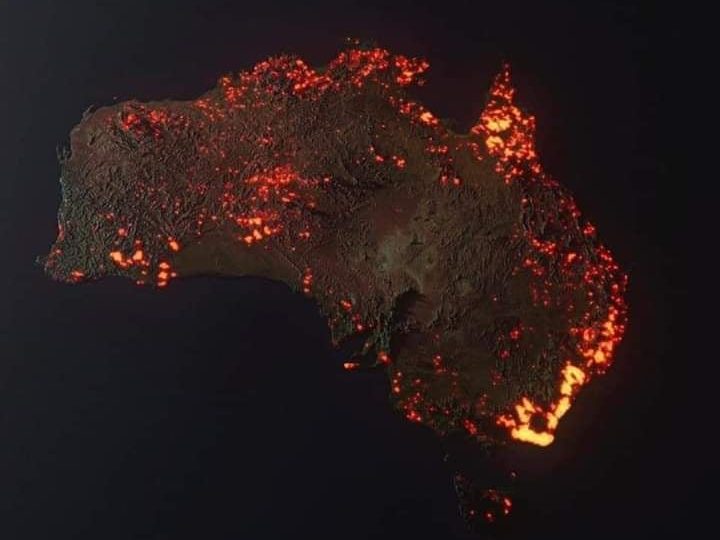 The worst fires in recent years have been devastating Australia since September, with a sharp increase in the past month. The land of kangaroos, where is now summer, is facing what Siberia and Brazil have gone through in the past months, among dozens of deaths, cities evacuated and over 250 million tons of CO2 and soot emitted into the atmosphere, an amount that ting the skies of Melbourne and Canberra red and yellow and making the air unbreathable.

According to the most recent estimates, more than 5 million hectares of forest have gone up in smoke, more or less the size of the Po Valley (other estimates speak of 10 million hectares, practically the Iceland) and half a billion animals would have died or been affected from the loss of the habitat in which they live, “a harrowing loss – according to WWF Australia – which includes thousands of precious koalas on the north-central coast of New South Wales, along with other iconic species such as kangaroos, wallabies, sugar gliders, cockatoos, potoroo and melifagi birds”.

The summer wildfires are not new, but those of this year are particularly fierce, thanks to a high drought and the highest temperatures recorded in recent years, fearsome signs of a changing climate and the consequences of which are visible even from space.

The role of climate. Climate change plays an important role in the fires that are harrowing the green areas of our planet: the dry climate and high temperatures favor the creation of brushwood and dry vegetation, especially in areas of New South Wales, south east of the continent. At this point, a spark, such as lightning, is enough to unleash hell. The worst thing is that phenomena of this type are subject to so-called “feedback loops” in which a consequence becomes a cause in a continuous cycle, for example, these fires are so massive that the smoke generated forms the storms whose lightning strikes start other fires, increasing their range.

Another of these cycles, which acts by reinforcing the effects of the climate crisis, is the curious and terrifying phenomenon of brown snow in New Zealand. The soot, which carried by the wind for over 2500 km arrives on the New Zealand glaciers, covers the snow and, darkening it, has two main effects: it warms the snow, accelerating its melting, and decreases the amount of light that is reflected towards the space, contributing to further heat the planet.

It is important to underline, however, that if the ignition of the wildfires in itself, in part, is not directly attributable to climate change, the conditions that allow the uncontrolled spread of fires and that therefore allows it to reach these catastrophic proportions are the result of warmer temperatures due to man-made global warming.

The origin of the wildfires. AnNews is spreading in these hours that most of the wildfires are not of natural origin but that they are the work of several arsonists and that these, more than 180, have been arrested. The news is only partially true: 187 people are investigated for events related to the lighting of fires but of these only 24, since November, have deliberately started fires, the rest are accused of not respecting rules for fire prevention or have thrown lit cigarette butts in risky areas.

The narrative that goes through these news, when addressed without the necessary clarifications, seems to diminish the role of the climate crisis in these fires. In fact, many fires are caused directly by human activities, such as field fires left unattended or firearms used irresponsibly, passing through malfunctions of trains which, braking, generate many sparks and therefore set fire to areas near the tracks. It is essential to highlight, however, that these fires are the least dangerous and easiest to extinguish: the places where the flames are consuming most of the forest are remote and unreachable. These are places where man has no access either to start fires or to intervene. According to Ross Bradstock, of the University of Wollongong, the largest fire ever recorded in Australia, the one that is consuming Gosper Mountain, would have been generated by a single lightning strike, in this case the human hand is much further upstream, with a process that starts with CO2 emissions.

The image of discord. Talking about the climate is never easy, it is a complex phenomenon that often, if treated superficially, offers the right to denialism or, on the opposite side, to alarmism. In this regard, the image shown at the beginning of the article is becoming viral. It is said around that it would be a shot by NASA showing the Australian fires and, the system that Facebook has introduced to report false news, would have indicated the image as a Fake News. But things are not quite like this: the image, as stated by the author, is a graphic elaboration, edited by Anthony Hearsey, made from NASA data that shows in red the places where the fires broke out in the last month. The image, therefore, is not a photo from space but it is not even a hoax: as reality often happens, reality is more complex than a simple true or false. The worst risk of this situation is that public discourse shifts from the severity of the Australian fires to the discussion of the image itself, which is very reminiscent of the famous finger pointing to the Moon.

As we are writing, a rainstorm is relieving, even if only temporarily, the battered eucalyptus forests and the exhausted firefighters: however, the certainty remains that events of this type, if we do not intervene as soon as possible and in a concrete way, will be destined to repeat themselves.