A week after the publication of the very first image of a black hole we try to understand what are the impacts and consequences of this discovery, not only from a scientific point of view but also from a cultural one. 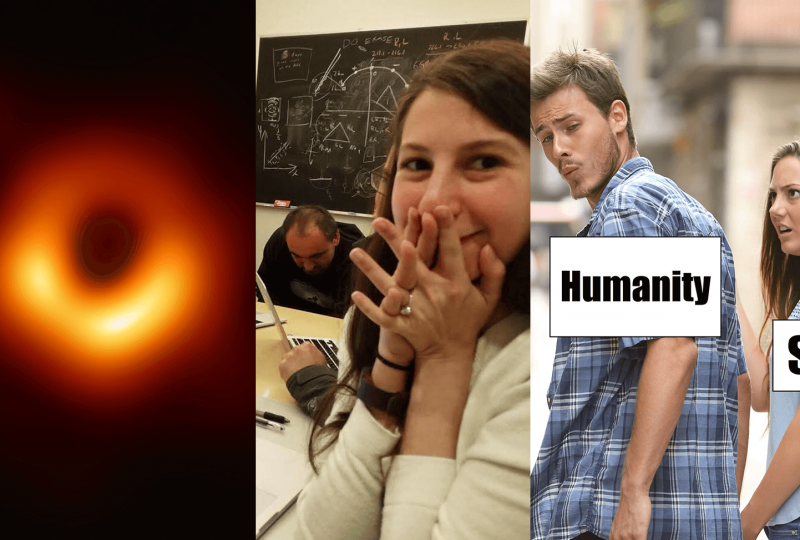 The image of the century, a red circle that surrounds a void that transcends our understanding of the universe, a success of astronomical research and a symbol of the importance of international collaboration. This is the image that has invaded social media and newspapers from all over the world. We have already told you about the incredible technological and logistical effort that led to its publication and today, one week later, it is worth spending two lines on what it means to have succeeded in observing a black hole.

Powehi. The black hole, technically known as M87 *, now also has a name “Powehi”, a Hawaiian term that could be translated as “dark adorned creation of depth” and which comes from the traditional Hawaiian chant “Kumulipo” which tells the creation of the universe according to the legends of the archipelago. The name was chosen by Larry Kimura, professor of linguistics at the University of Hawaii-Hilo, to honor the presence of two telescopes of the Pacific islands within the consortium that “shot” the photo. The name, for now, is not official as it will have to be accepted by the IAU, the International Astronomical Union, but even those who have worked on the project have already started using it.

A black hole in motion. According to Shep Doeleman, EHT project leader, it will not take too long before the radio telescope network will be able to provide a video of the growing disk rotating around the black hole. With the addition of new telescopes, there will be not only a substantial increase in image resolution but also a greater ability to obtain images that could be used to make a video. More than a video, however, it will be a Timelapse, a movie that shows in a few seconds a large amount of time, which is good: Powehi is a huge black hole, so huge that the material in rotation around the disc takes many days to make a revolution around it and then show a substantial difference between the different frames. Each of these, in fact, requires several hours of observation to be obtained.

SgrA *, the original target of EHT, the supermassive black hole at the center of our galaxy will be a different kind of effort. Despite being much closer – 26,000 light years compared to 53.5 million light-years from M87 * – getting an image of his own, and even more getting a movie, will put a strain on the techniques and skills acquired by the research team. SgrA *, however gigantic, is much smaller than his brother. The material that surrounds it, in fact, makes around in a few hours or minutes, making it difficult to acquire and process images that show the change in a coherent way, which would happen so quickly that it would not be possible to distinguish the rotation. To complicate things there is a great quantity of dust and gas that separates us from the center of our galaxy (the same dust and gases responsible for the glow of the Milky Way nucleus in a dark night) that obscure the subject.

The smiling face of the black hole. Together with the release of M87 * another image went around the social media boards, the photo showing the young researcher Katie Bouman who gets excited in front of the first render of the image created through the algorithm she contributed to compile. Bouman has given – involuntarily – a face to the research. On one hand this can send a wrong message, an anachronistic return to the imagination of the lone scientist who revolutionizes a field of knowledge: today scientific results are less and less the result of the efforts of a single individual and more and more a collective work, the so-called “Big Science”, capable of moving huge capitals, infrastructures, means, technologies, and minds to achieve a result. On the other hand, the fact that the face of a young girl has become a symbol of EHT’s success could have positive impacts: images of women at work in science are welcome, they are too often under-represented or relegated to marginal roles, if not, in cases now sadly known, deleted. For each of these figures, young girls may decide to pursue a career in STEM.

A pop black hole. The result of this research will not only change the conception of our universe and the study of astrophysics but has had an impact that we could define as viral on the various social networks. Like any great achievement that is achieved by humanity and like any news that gets media coverage, even the image of Powehi has found new life on the internet in the form of memes. We’ve collected the funniest ones. 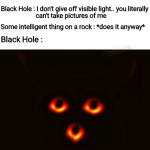 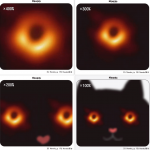 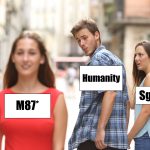 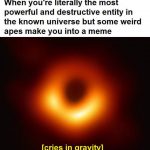 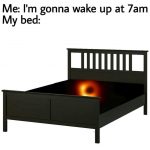 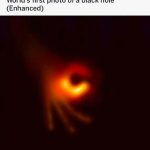