On the Moon there is a huge buried mass

It is located at the south pole of the satellite and its mass is so large as to disrupt the gravity of the area. 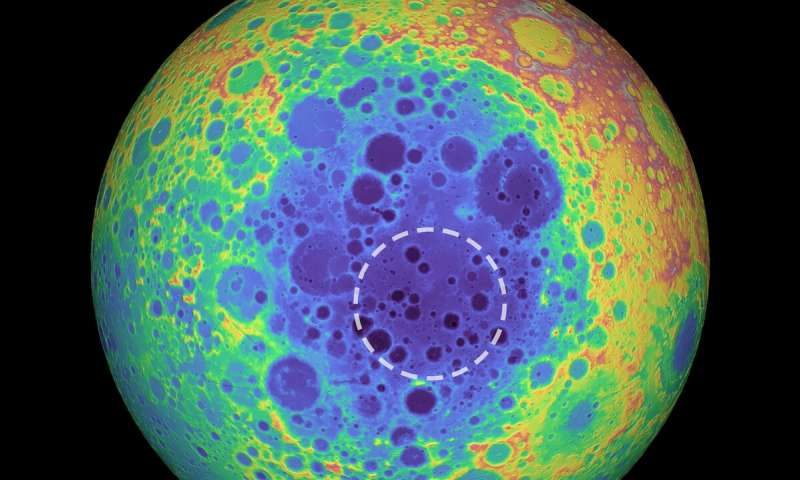 In the movie 2001: A Space Odyssey a magnetic anomaly in Tycho crater, near the south pole of the Moon, turns out to be the famous monolith that will start the story. In the real world, a research based on two NASA observation campaigns revealed a gravitational anomaly in the Aitken Basin, located at the south lunar pole, one of the largest craters in the Solar System with a diameter of over 2500 km. The cause of this anomaly appears to be a gigantic metal mass buried under the surface of the Moon: by studying it we will be able to learn more about our satellite, its history and therefore ours.

Anomalous pushes. Since the Apollo missions, the presence of gravitational anomalies, the so-called Mascon (mass concentrations) had intrigued astronomers: areas in which the lunar attraction varied even substantially. Some of the first probes have seen their orbit modified – in an imperceptible but constant manner over time, small pushes accumulated changing their trajectories – until they crashed onto the Lunar surface. The presence of these anomalies is normal after all the celestial bodies are not perfect and uniform spheres but contain within them mass concentrations of various types which make the gravitational field all bumps and depressions.

A giant metal mass. That discovered in the research published in Geophysical Research Letters, however, is very special. It’s supposed to be a metal mass, most likely what remains of the asteroid that formed the crater about 4 billion years ago, when the Moon was just born, and that today is buried in the lunar mantle. The asteroid had to have a core of iron and nickel dense enough not to disintegrate on impact but, at the same time, not too compact, so as to be able to remain suspended in the mantle without sinking into the nucleus. It is estimated to have a mass of over 2.18 quintillion kg, 2.18 followed by 18 zeros and is located at a depth of 300 km.

“Imagine taking a mountain of metal – said Peter James, the study’s first author – five times larger than the Big Island of Hawaii, and burying it underground. This is more or less the amount of unexpected mass we have detected”. The mass of this object is such that it is assumed that the depression that characterizes the South Pole-Aitken Basin, about 13 km deep, is due to a good percentage – corresponding to about 800 meters – to the gravitational attraction of this object.

Impacts of another type. This discovery could have a great impact, figuratively in this case, on our knowledge of the Moon and on the future of human exploration of our satellite. The Chinese lunar rover Yutu 2 is located right inside the crater and is studying its characteristics, looking for possible areas suitable for hosting future lunar bases: detailed knowledge of the area and its gravitational characteristics is fundamental for the success of these plans.