The Carrington event: a lesson for the future

A geomagnetic storm could hit our planet, as it did 160 years ago, at any moment with devastating consequences 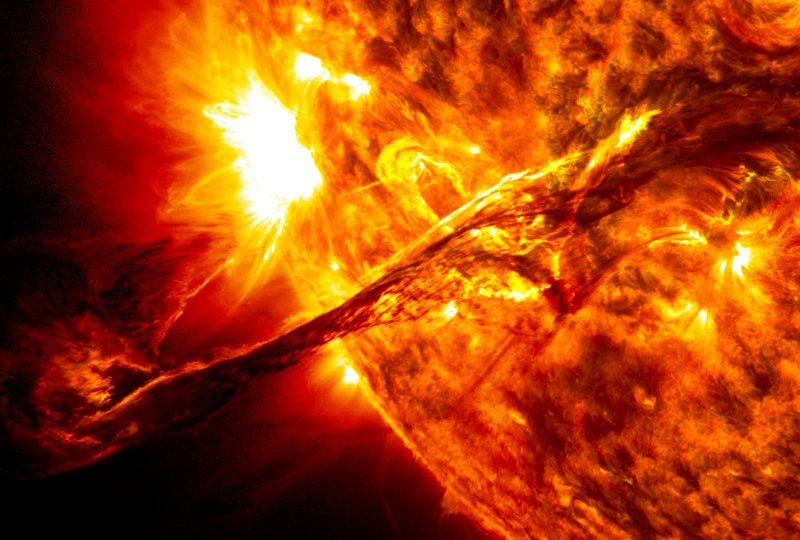 On the morning of September 1, 1859, the young astronomer Richard Carrington was observing the Sun with his telescope. His attention had been caught by a group of sunspots. Suddenly, at 11.18, a very strong flash of light almost blinded him. Something extraordinary had just happened and Carrington documented his observation with a precise diagram. The next day a series of exceptional events hit the whole planet: from Rome to the latitude of Cuba it was possible to see an intense blood-red aurora borealis, the copper cables of the telegraph lines melted, and some fires were started by the sparks that shot from the telegraph operators equipment.

Causing these phenomena was the geomagnetic storm generated by the coronal mass ejection observed by Carrington, the most powerful ever recorded. At the time, this story passed almost as a curiosity but a similar event today could cause immeasurable damage on a planetary scale.

Geomagnetic storm. In the complex dance that keeps our Sun alive that sees alternating gravity, plasma flows and electromagnetic fields, sometimes material is ejected from the corona, that is the most external and warm part of the Sun’s atmosphere: guided by the curves of the powerful field magnetic, electrons and protons, charged particles, are launched into space in what are called CME (coronal mass ejections). If these clouds of particles reach our planet, they are captured by our magnetic field and generate geomagnetic perturbations which, in the atmosphere, ionize gases and generate the famous and splendid Northern Lights, very powerful currents are generated in electrical circuits which risk damaging them.

Potentially devastating impacts. What would happen if a similar phenomenon were to hit our planet today? In 1859 electricity was a phenomenon whose applications were just beginning to take hold and therefore the consequences of the Carrington event were contained by some fires near telegraph systems and the suspension of service for 14 hours. Today the situation would be very different. Our entire civilization depends on electricity. Circuits are an extension of our life. From smartphones to computers that manage our bank accounts, from hospital power systems to refrigerators and refrigerated rooms that store our food. A world hit by a high intensity geomagnetic storm would be a world without electricity for days, if not weeks, in some areas months.

Power plant transformers, in fact, subjected to current flows far above their capacity, would be irreparably damaged. Their merger would lead to a blackout. An entire country that runs out of electricity for an extended period would face very serious problems. From the supply of drinking water (without electricity the pumps do not work) to non-refrigerated food, from the transport system stopped to industries and companies unable to do their work. A society hit by a geomagnetic storm would face enormous damage. But what is the likelihood of such an event happening and what can we do to reduce the damage?

How to avert the catastrophe. A coronal mass ejection that hits us in full is a very rare event. Compared to the Sun, the Earth is a distant dot. Despite the low risk, constantly monitoring our star is the first step in preparing. Fortunately, we are constantly keeping our eyes open and may have a warning in the case of CME (which still takes several hours to reach our planet). This is crucial because it would allow power plants to put into practice various preventive measures that would prevent the destruction (or at least decrease the damage) of transformers and power lines.

As with meteoric impacts, geomagnetic storms are not about if but when. Sooner or later in the future such a catastrophe could happen. It is up to us to be prepared in such a way as to minimize the damage.