Today, 50 years ago, the journey of Apollo 11 ended, returning safely to the ground. What was it like coming back to Earth and what did the astronauts left behind? 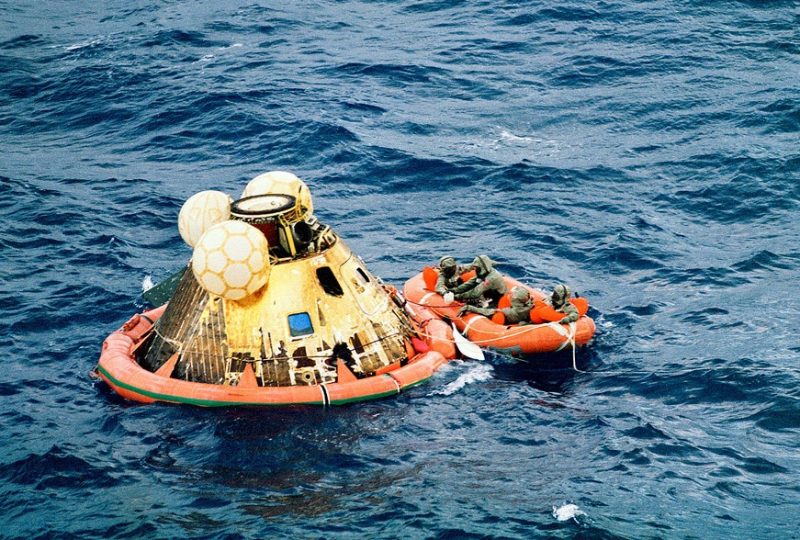 Three giant orange and white flowers blossoming in the sky above the Pacific Ocean have signaled to the world the end of the Apollo 11 mission, the one that first brought the man to the moon 50 years ago. Those were the parachutes of the Columbia capsule that brought Neil Armstrong, Buzz Aldrin, and Michael Collins back from one of the greatest adventures in the modern world. The mission could be considered concluded there but in reality, it lasted for many other days.

Lunar viruses. Today it may sound a bit ridiculous to us but in 1969 there was no concrete knowledge of the lunar environment. At the time, the most widespread hypothesis, which proved to be correct, was that the Moon had a sterile surface, of great geological interest but of no value from the point of view of biology. The doubt, however, that some primordial alien life forms, viruses, and lunar bacteria could exist spread across the medical team of the Apollo program. Precautions had to be taken. Some of these were too cautious, others, as we shall see, a bit too slack.

Frogmen. As soon as the capsule splashed down waiting for it there were specialized divers, called frogmen, who had two tasks: to secure and stabilize the floats that allowed the capsule to stay afloat and provide the crew with special biological isolation suits that the three would have to wear inside the capsule so as not to disperse any extraterrestrial microbes into the environment. The problem was that in order to provide the astronauts with the coveralls the door had to be opened and therefore there was a risk of contamination. In that case, they simply hoped that the frogmen were quick enough to open and close the door.

Three weeks in a caravan. While procedures to avoid biological contamination were, to be generous, not very serious, on the other hand, to ensure that there was no form of infection in the astronauts, a 21-day quarantine procedure was initiated. As soon as they boarded the capsule recovery support ship, the USS Hornet, the three were locked inside a special trailer called Mobile Quarantine Facility and then transported by plane to the Lunar Receiving Laboratory, a facility built specifically to house astronauts in quarantine together with the samples they brought back from the Moon.

What we left behind. In order to return to orbit from the lunar surface, the LEM ascent module had to be as light as possible. Considering the tens of kilograms of rocks, it was necessary to make space: for this reason the astronauts left on the Moon practically all the equipment used during their stay on the surface, from gloves and boots to special bags used to evacuate, passing obviously for the rover lunar (in the last 3 missions of the program) and a large amount of scientific instruments collectively called Apollo Lunar Surface Experiments Package. Among these instruments, there were also special retro-reflectors capable of precisely reflecting the light sent from the Earth and which are still used today to measure, using a laser, the distance of our satellite with enormous precision.

If most of what we had to leave on the moon was for technical or scientific reasons, the astronauts also left something more human. During the Apollo 12 on the surface was placed the smallest museum in the world (and the Moon): a small ceramic rectangle the size of an SD card with small original works by six great artists of the 60s, including Andy Warhol, John Chamberlain, and Forrest Myers. This micro art gallery is not the only artwork on the Moon: during the Apollo 15 mission, it was left on the surface a small aluminum sculpture depicting a stylized astronaut. Next to this, a small plaque commemorates all the astronauts and Soviet cosmonauts who died during the space race. Apollo 16 astronaut Charlie Duke left something more personal: a photograph of his family. 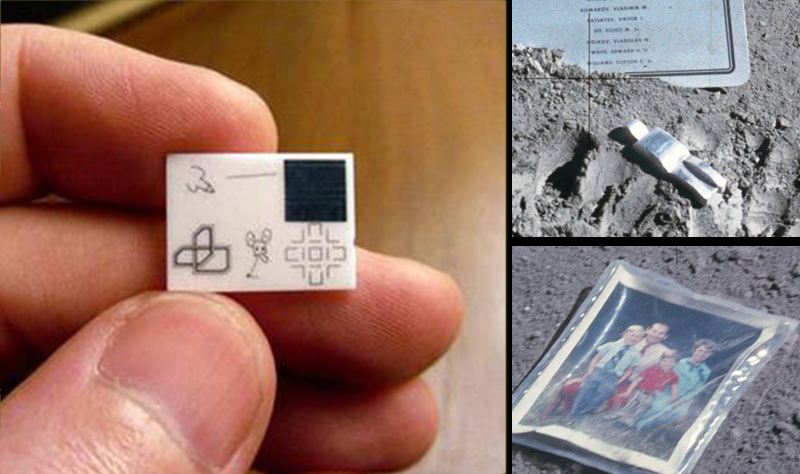 What we took away from the Moon. The three astronauts brought back a priceless treasure, initially held in quarantine with them. 22 kg of lunar rocks, carefully chosen under the pieces of advice of geologists (during the training, the astronauts followed long and in-depth lessons in geology, theoretical and practical, in order to be able to recognize the rocks of scientific interest). In total, the different Apollo missions brought 382 kg of lunar rocks from the Moon, including the famous one Genesis Rock, an intrusive magmatic rock called anorthosite, found by the Apollo 15 crew that dates back to a period shortly after the formation of the lunar crust, 4.4 billion years ago. The Genesis Rock gave us information on that period, in which the Moon had recently separated from the Earth, according to the most accepted theories, following an impact with a planetoid as large as Mars called Theia.

There is one last thing, very important that we have taken away from the Moon: knowledge. The Apollo missions have brought to humanity a huge amount of knowledge, in the form of technical and technological skills, which have also had repercussions on our everyday life, and in the form of theoretical knowledge about the Moon, its formation and its relationship with the Earth, allowing us to reveal part of the history of our planet and therefore also of ours.