The Starlink constellation that will bring the Internet to the entire surface of the planet is likely to obscure the sky for astronomers: a collaboration is born between SpaceX and various scientific bodies. 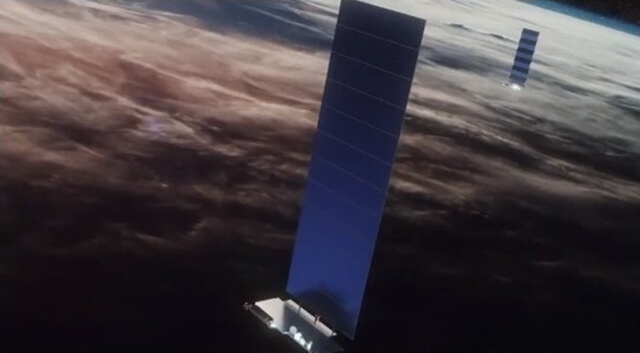 On May 23rd, Space X put into orbit, with a single launch of a Falcon 9, the first 60 satellites of the Starlink constellation that will bring broadband internet anywhere in the world, a useful innovation especially for isolated areas or zone unserved by optical fiber, a way to provide everyone with access to a tool, the internet, which is revolutionizing the way we communicate and relate to the world. In total there will be 12,000 satellites separated into three groups arranged on different heights; it is expected that the project will be operational from 2027, but in the meantime, the first satellites raised various controversies.

The matter, in fact, worries astronomers all over the world, who could see their astronomical observations streaked by the passage of some of these satellites. Immediately after the launch, in fact, the satellite caravan was particularly visible even with the naked eye, as evidenced by several videos circulating on the internet and some photos of astronomers who complained to Elon Musk on Twitter.

High altitude controversies. Will this technological innovation cost us the loss of the immaculate starry sky? For us ordinary citizens accustomed to a sky with very few stars due to the light pollution of our cities the problem does not arise. It is those who deal in a professional or amateur way with probing the Universe with telescopes that are worried about the possible negative impacts of this technology. According to the CEO of SpaceX, in fact, the satellites would become much less visible once they reach their orbit: immediately after launching their altitude was less than 400 km, making the satellites much more visible, moreover these, once in position, will orient their solar panels, highly reflective and responsible for much of the space light pollution, so as to reduce it to a minimum.

The radio problem. The real problem seems to concern radio astronomy, that branch of astronomy that uses radio waves to observe the Universe. Many observations, in particular of phenomena otherwise difficult to observe as low-light stars or active galactic nuclei – an example above all, the recent image of the black hole has been obtained thanks to radio telescopes – are made using some of the frequencies used by the satellites which would then be in able to “obscure” the sky with their noise. Elon Musk showed himself to be very sensitive to the subject and in fact, he started a collaboration with the National Radio Astronomy Observatory, the Green Bank Observatory, and the National Science Foundation to find ways to work together to protect radio astronomical activities.

Watch the video of the passage of Starlink satellites: