The incredible effort of the EHT international collaboration has produced the first image of a supermassive black hole located at the center of the M87 galaxy over 50 million light years from Earth. Let's find out all the details of this fascinating scientific result 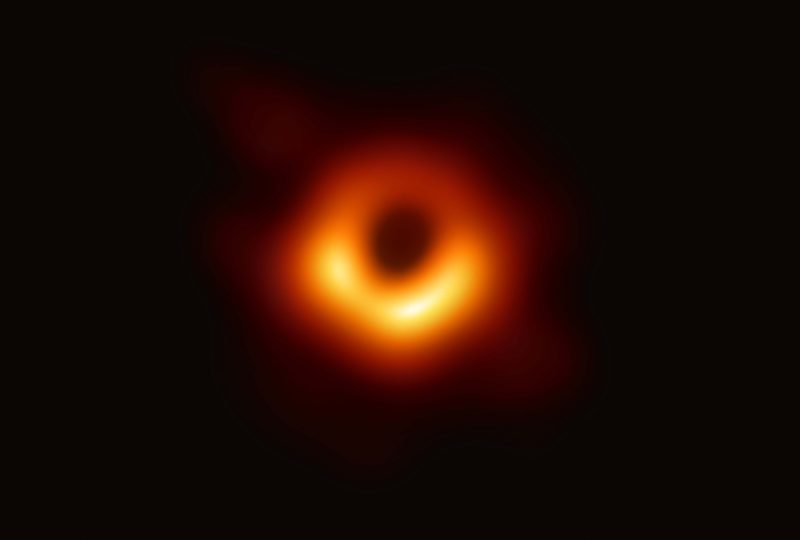 “The history of science will be divided into a before the image and an after the image” these are the words Michael Kramer of the European Research Council used to comment on the incredible result obtained by the international collaboration known as EHT, Event Horizon Telescope. Over 200 researchers, scientists and technicians from all over the world have worked to obtain the image of something that cannot be seen, the first image of a supermassive black hole that is located in the center of the M87 galaxy almost at 55 million light years from us.

We are facing a turning point, not only from a scientific point of view but also from an organizational and global coordination point of view, yet another confirmation that the future of large-scale scientific research can only be achieved by overcoming political and geographical boundaries to being able to touch the boundaries of knowledge.

An identikit of a black hole. Before talking in detail about the image and how it was obtained, it is worth spending some words to know what we are talking about. A black hole is born when an enormous mass, a star (if massive enough), collapses on itself at the end of its life cycle. A black hole, despite its name, is neither a hole nor black. If the circular shape and the name suggest a hole, in reality, we are facing something more complex and decidedly out of our experience.

A black hole is an object whose mass is concentrated in one point, the so-called Singularity. This huge concentrated mass distorts the very fabric of our universe, space-time, so much that it does not even allow light to escape from its grip. The “black” in his name is not the color, but the lack of information: what falls in a black hole remains in the black hole. In these gigantic monsters of nature the natural order of things, the physical laws, cease to exist once they reach a certain limit – called the Schwarzschild Radius – that is created around the singularity.
It is what is called the event horizon and could be what has been “photographed” by EHT. Using the conditional is a must, because interpreting such an image, as obvious as it may seem, is not easy. 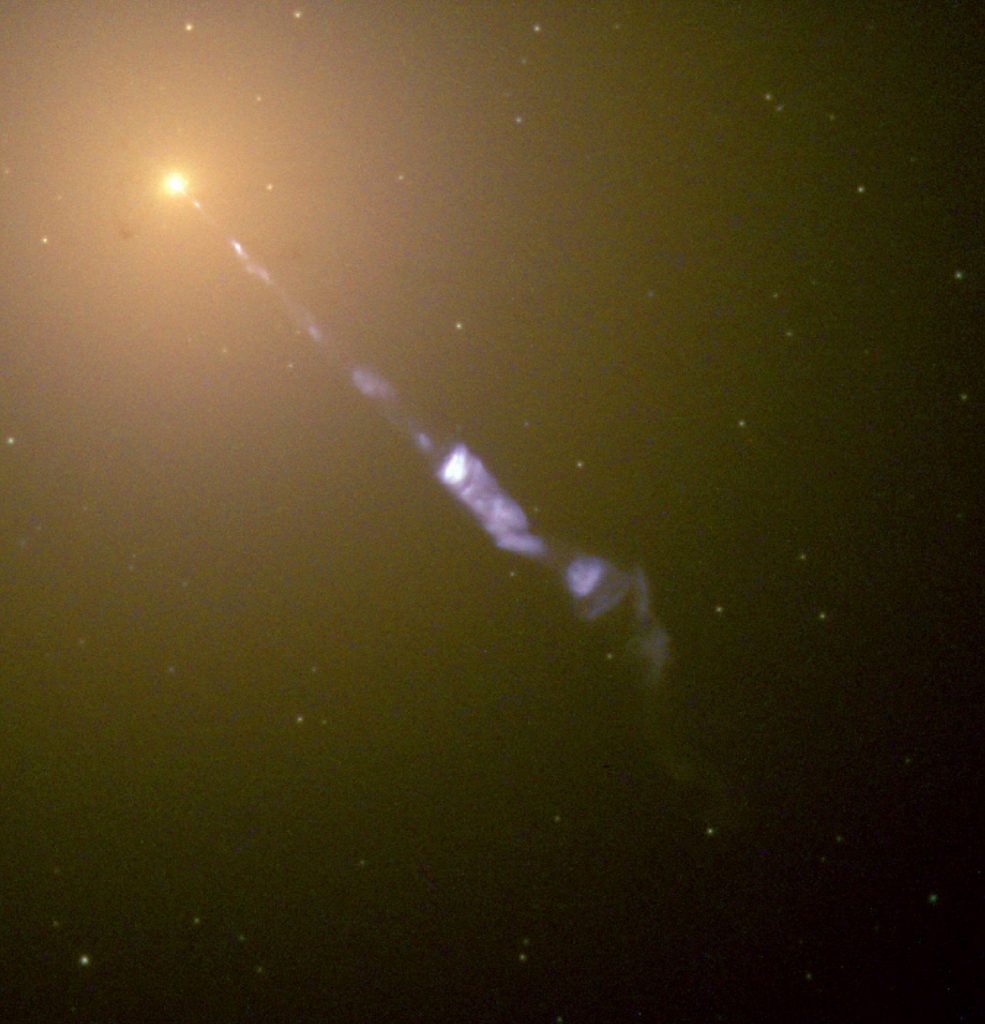 The image. In fact, what you are observing is not exactly what it seems. Let’s start at the center. The black disk that you can see in the center is the event horizon, it is bigger than our entire solar system, and here we meet two visual deceptions: it looks like a disk but it is a sphere, even if not in physical sense. It is defined as a mathematical surface: imagine it as the boundaries of a nation, they do not exist physically but the consequences of their existence are very clear to all.

We have said before that this “surface” has a radius equal to the Schwarzschild’s radius, yet in reality, it is 2.6 times larger than it should appear in the image. This is because the distortion of space-time around the black hole is so strong that our sight is curved around and behind the sphere of the event horizon, actually showing us also the back of the black hole, if only it were possible to observe it, so there it appears as a bigger zone of nothing.

But it is not the only thing that is distorted. The circle of light, whose interpretation is not yet completely certain, should be a fusion between the edge of the event horizon and the accretion disk around it. The material that is so unlucky to pass near the black hole is attracted towards it and begins to spiral at a crazy speed, close to that of the light. At this relativistic speed, the matter that makes up the disc (mostly dust and gas) heats up to billions of degrees and becomes plasma, emitting radio waves.

The research team observed that this plasma disk is almost perpendicular to our point of view as if we were looking at it from above and that it rotates clockwise. And it is precisely the rotation that gives the ring that characteristic brighter area at the bottom. This is the Relativistic Doppler Effect. Let’s talk more clearly: the Doppler effect is what makes us hear the sound of a siren approaching more sharply than when it moves away. The sound wavefronts accumulate when the sound source moves towards us, they distance themselves when it moves away. The relativistic Doppler effect is the same thing but with light instead of sound. When matter, moving at that speed, moves towards us, it is as if the light that it emits accumulates and becomes more intense, on the other hand, when it moves away from us it loses brightness.

The black hole in the middle of the M87 is gigantic. It has a mass of 6.5 billion and a half times that of the Sun, and yet it is not the size and appears very small. How much? As much as a sesame seed in Washington DC seen from Brussels. It is the incredible distance that separates us from it that makes it so microscopic, 53.5 million light years. The light that has come down to us and that we used to build this image has traveled 53.5 million years: this black hole appeared like this when on Earth the dinosaurs were recently extinct. But how did we manage to collect the little light that comes to us from such a distant place?

EHT, the international effort. It is important to immediately clarify something, the image you see is not a picture as we conceive it, it is something similar but also different. This is the visual reconstruction of data collected through radio waves. We talked about collected light because what we normally call light is actually only a small fraction of what in scientific language is called the electromagnetic spectrum, photons, particles that carry light information, have a variable wavelength and with the variation of this it slides from the radio waves to the gamma rays, the small slice in the middle is what we commonly call light, the one that our eyes are able to perceive. So this is a photo but obtained using radio waves and the “camera” we used is the largest that has ever existed.

To observe such an apparently small object, it occupies only 40 micro-arc-seconds in the sky, a gigantic radio telescope is needed, the size of our entire planet. Obviously building an object of this kind is practically impossible, which is why we chose to follow an alternative route: creating a virtual telescope. The technique used to merge data is called very-long-baseline interferometry or VLBI and provides perfect synchrony to coordinate data; to do this, atomic clocks were used with unprecedented precision. 8 radio telescopes scattered all over the globe have simultaneously collected, for 4 days, the data from a tiny point in the sky and then synchronize them thanks to an algorithm created by a very young researcher, Katie Bouman. Not an easy job considering that we are talking about 5 petabytes of data, 5000 Terabytes, divided into 6 cubic meters of hard drives.

Some of the used telescopes are located in places not easy to reach and where there is not a fast enough data connection so the different hard drives have been shipped or flown inside liquid nitrogen-cooled containers. 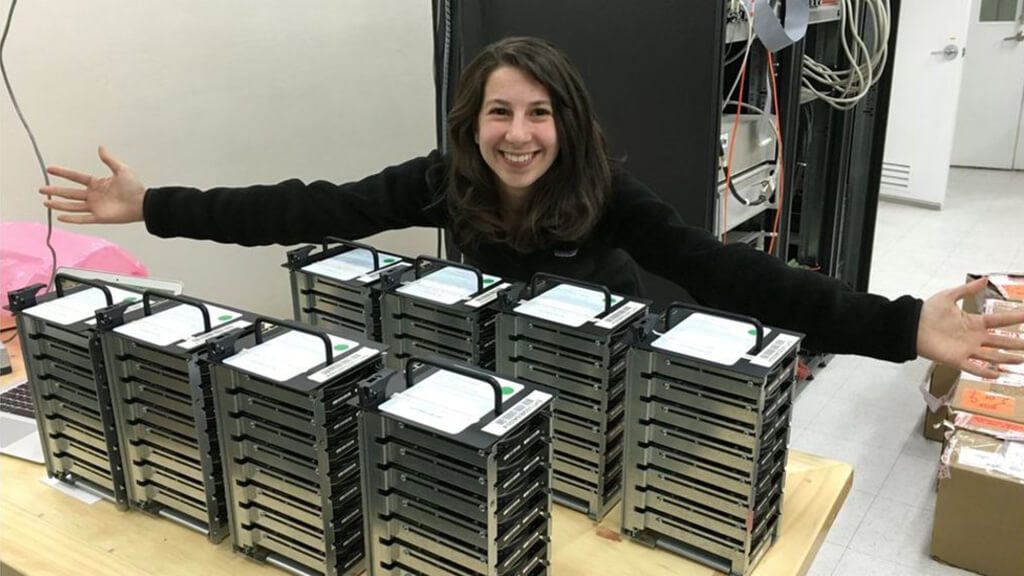 Defeat the bias. We know that we humans are very good at seeing what we want to see; to prevent the data analysis from unintentionally lead to non-objective results, the various hard drives were sent to different independent research teams, each of which processed the image on its own. The results are always the same, confirming that what we are seeing is really a black hole. We are sure because 100 years ago a gentleman you may know, a certain Albert Einstein, had suggested the existence of these incredible astronomical objects and had mathematically described their characteristics. The models built by those formulas perfectly match the data collected and the images they process.

Impacts. There are already those who talk about photos of the century, with good reason, but going beyond the very important sense of wonder that such results can create, what did we really get from this two-year effort?

And now? This photo represents the end of an international commitment and at the same time a beginning. The next step will be to get a photo of another black hole, SgrA * which is located in the center of our galaxy which, together with the one observed, was the other goal of the research campaign. Everyone expected to get a picture of the black hole closest to us, SgrA * is in fact just 26,000 light years from us, but we had not come to terms with the dust that surrounds it, which makes it more difficult to observe; moreover, since this black hole is closer and smaller, being able to frame it precisely requires greater effort. Apparently, however, the data has already been collected and now we need “only” to process it. But the surprises do not end there, in the future we could also expect a video that shows the movement of the black hole. Furthermore, with the arrival of new telescopes in the EHT network, we will be able to obtain, in addition to a higher resolution, also a version of the image with polarized light, which will provide a great deal of massive data magnetic fields surrounding black holes.