SensHand: the glove that makes possible the early diagnosis of Parkinson’s disease 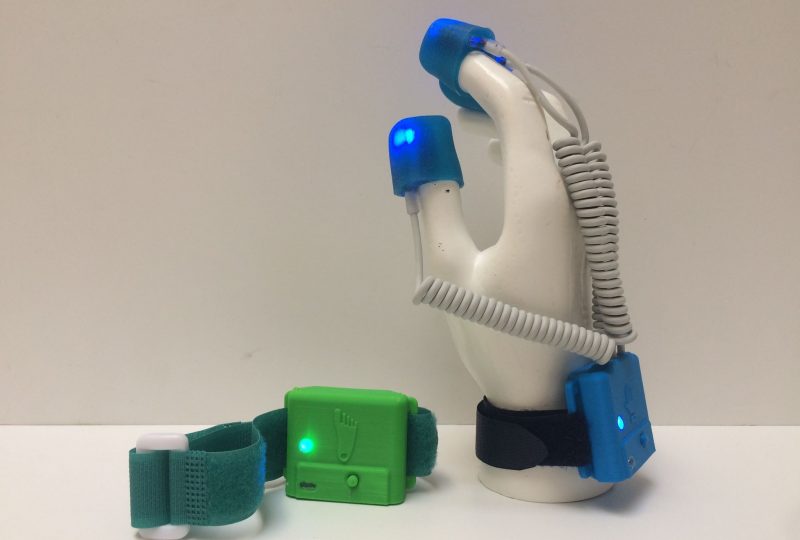 From the simplest of smartwatches, capable of measuring the heartbeat and some vital parameters, to the most sophisticated system equipped with sensors and artificial intelligence for data analysis, that of wearable medical devices is a rapidly growing sector that promises a further evolution for the near future.

Waiting for the diffusion of subcutaneous chips and tattoos with biomarkers, there are many applications of these devices, which allow not only the monitoring of the health status and parameters of the patients but also the diagnosis of some diseases.

It is the case of SenHand V1, a hi-tech glove that, used together with AI techniques, allows the early diagnosis of Parkinson’s disease up to 5-7 years before the onset of the disease. This was presented by Filippo Cavallo, scientific responsible of the joint BioRobotics for Parkinson Disease Laboratory, between Scuola Superiore Sant’Anna, Pisa and Ospedale Apuane, Massa.

What is SensHand?
SensHand is a wearable device, designed to measure the movements of the upper limbs very accurately. SensFoot was also developed for the lower limbs.

The most important element of technological innovation consists of the miniaturization of the components, to the point of being able to create devices such as rings or thimbles equipped with sensors. This allows more precise detection of the motor movements of the lower and upper limbs, compared to other solutions available on the market (eg Smartwatch), which measure these parameters less accurately.

Studies were then carried out, using this tool to measure some motor parameters that are typically detected during a Parkinson’s disease diagnosis test.

Through SensHand it is possible to have extremely high levels of precision and accuracy, make a diagnosis, objective and accurate motor evaluation of patients with Parkinson’s disease.

How is Parkinson’s disease diagnosed?
The tests for the diagnosis of Parkinson’s disease consist of a series of motor exercises that follow evaluation scales. The assignment of scores is carried out by the neurologist and this implies a degree of subjectivity.

The goal is to use SensHand to detect motor variations and therefore motor declines in Parkinson’s subjects even before the disease can be manifested. As demonstrated by the clinical literature, Parkinson’s disease, in its early stages, is presented with “subtle” signs.

When the motor decline reaches a perceptible situation, especially from the patient, the person begins to make a series of visits.

SensHand and the use of artificial intelligence techniques to analyze the collected data make it possible to distinguish and classify subjects with olfactory dysfunctions at risk of Parkinson’s with an accuracy of about 80%.

This is the result of a test carried out on a sample of 90 people (1/3 healthy subjects, 1/3 with olfactory disorders, 1/3 diagnosed with Parkinson’s disease).

The instrument can, therefore, predict or give an idea of high risk on some subjects of the possible onset of Parkinson’s disease.

What are the advantages of SensHands?
SensHand allows you to identify a patient at risk of Parkinson’s up to five to seven years ahead of what the onset of the disease should be. This using sensors and an analysis kit of olfactory abilities can give, in a very economical way, compared to what happens now, a piece of very precise information to predict Parkinson’s disease.

Once SensHand detects a high-risk subject, more accurate tests and analyzes can be prescribed to confirm or not Parkinson’s disease. Exams that normally are not done if there is a suspicion of Parkinson’s because they are very expensive and invasive. One of these tests is the DAT Scan which uses neuro-imagining techniques to highlight whether there are areas of the brain that are particularly affected by the neurodegenerative process.

At what point is the development of the device?
The goal is to make SenHand a Clinical Decision Support System (CDSS), a medical device supporting the doctor.

Currently, we have created a series of synergies with different hospitals (eg Hospital of the Apuan Alps of Massa and Carrara) and we are trying to extend the experimentation necessary to bring the device to be used in clinical practice.

Adriano Fontanari, a young digital health enthusiast, is a M.Sc. student in Innovation Management. In 2016 he co-founded a care management service for people that suffer from a chronic disease.

Artificial intelligence and Covid-19: between hype and reality

Every day there is news about the potential of artificial...

Medicine takes important steps towards a future dotted with innovations...

SensHand: the glove that makes possible the early diagnosis of...

From the simplest of smartwatches, capable of measuring the heartbeat...

Blockchain is considered a revolutionary technology that will positively impact...