The magnetic tentacles of the jellyfish galaxy JO206 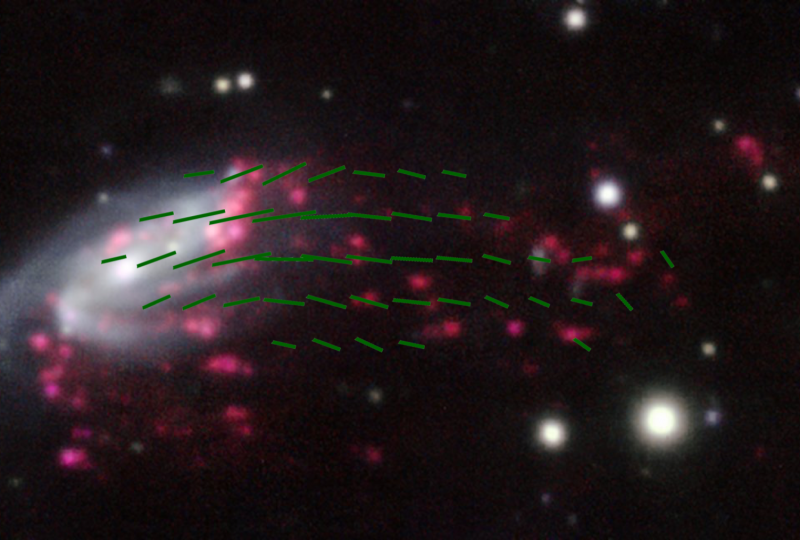 An international team of astronomers has studied in detail JO206, a so-called “jellyfish galaxy” – in English jellyfish, so called because it shows “filaments”, similar to the tentacles of a jellyfish, composed of stars and gas, which extend for almost 300 thousand light years. In particular, the researchers analyzed the intensity and direction of the magnetic field of the galaxy JO206, discovering that even in its fragmented gas tail there are intense magnetic fields well aligned with it. The first author of the work, which was attended by researchers from the National Institute of Astrophysics (INAF), the University of Bologna and the Leibniz-Institut für Astrophysik in Potsdam, is Ancla Müller of the Ruhr-Universität of Bochum. The study was published in an article in the journal Nature AstronomyNature Astronomy and was conducted as part of the GASP (GAs Stripping Phenomena in galaxies with MUSE) project, funded by the European Research Council through an ERC Advanced grant.

The discovery of the magnetic field in the tentacles. Typically, “jellyfish galaxies” are found within clusters of galaxies, moving towards their center. During their motion towards the center of the cluster, the jellyfish galaxies are deprived of their interstellar gas, torn in the opposite direction due to the interaction with the hot gas that permeates the cluster. This is how the typical tail originates which gives these galaxies the appearance of a jellyfish, and gives them this particular name. Previously, a group of researchers led by Bianca Poggianti, INAF research manager in Padua who coordinates the GASP project and also co-author of the current study, had discovered that new stars originate in the tails of jellyfish galaxies. “It is known that the magnetic fields of galaxies can also contribute to the formation of new stars,” explains Poggianti. “However, it is not yet clear what role magnetic fields themselves play in star formation that occurs in their gaseous tails, an environment that is difficult to study due to low light.”

A first step towards understanding this phenomenon was taken by the studio of Ancla Müller and collaborators. The researchers involved analyzed the magnetic field structure of JO206 thanks to deep observations made with the JVLA (Jansky Very Large Array) radio telescope in the United States. The study shows that the galaxy’s tail, and not just its disk, also hosts an intense magnetic field. By studying the polarized emission from the galaxy, the astronomers were able to conclude that the magnetic field is very precisely aligned with the tentacles of the tail.

“To measure the magnetic field it was necessary to study not only the radio band emission of the galaxy, but also the X-band emission of the surrounding medium. Our contribution was precisely that of analyzing the X observations of the cluster obtained with NASA’s Chandra satellite, to derive the density of the hot gas surrounding the galaxy, which is a fundamental parameter in estimating the magnetic field “, explain the scholars. of the University of Bologna Myriam Gitti, professor at the Department of Physics and Astronomy “Augusto Righi”, and Alessandro Ignesti, PhD student in Astrophysics.

Computer simulations reveal a possible interpretation. With the help of computer simulations, the group reconstructed a possible scenario that would explain the results of the observations. As the galaxy JO206 moves towards the center of the cluster, its magnetic field interacts with the surrounding hot gas, which builds up on top of the galaxy itself. In this interaction, the galaxy’s magnetic field is in turn amplified and aligned along the tail, giving rise to the high fraction of polarized radiation observed by the researchers.

“JO206 moves at high speed towards the center of the cluster, a motion that causes the interaction between the magnetic fields and the hot wind of the intergalactic medium, generating an accumulation of plasma”, continues Poggianti. “Part of the plasma then condenses on the outer layers of the gas tail and ‘wraps’ the tail of gas that has been torn from the galaxy, determining the direction and properties of its magnetic field”.

The next step, say the authors, will be to verify whether this scenario can be confirmed with observations on other similar objects. “To test the hypotheses suggested by the observations of the galaxy JO206 we are observing other galaxies with similar tails using radio telescopes in Australia (ATCA), South Africa (MeerKAT) and the United States (JVLA)”, concludes Poggianti. “The observation of the magnetic field of JO206 is the first and so far the only investigation of its kind in a jellyfish galaxy. We need other observations to understand if the phenomenon discovered is common or exceptional. This will also allow us to understand what connection exists between the magnetic field and star formation outside the disks of galaxies ”.