The farthest black hole ever observed

Thanks to data collected by the Chandra X-ray Observatory, an international group of researchers may have identified a quasar dating back only 850 million years after the Big Bang 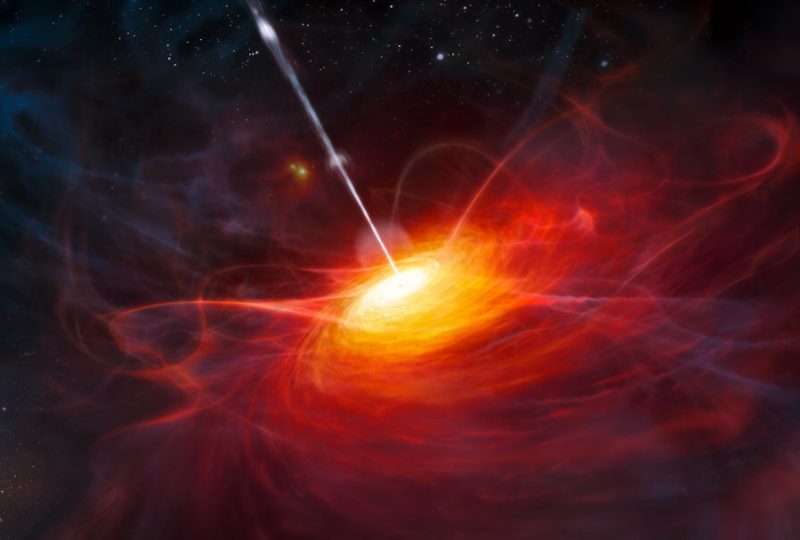 An international group of researchers has announced the discovery of what appears to be a heavily obscured black hole, or quasar, dating back only 850 million years after the Big Bang. This is the first evidence of the existence of a hidden black hole in such a remote era. The discovery was born thanks to the analysis of data collected by the Chandra X-Ray Observatory, the NASA orbital telescope for observing the sky in X-rays.

Almost stars. A quasar (a contraction of QUASi-stellAR radio source, that is “quasi-stellar radio source”) is an extremely bright active galactic nucleus: the first discovered detected thanks to their powerful emission of radio waves, were observed, with telescopes, as a point-like source, almost like stars, hence the name. These are black holes “covered” by clouds of debris and dust that circulate around it, generating, by friction, an enormous amount of energy and radiation around the black hole, thus producing an extremely bright and visible emission.

Look far into space and in time. “The identification of a quasar obscured in the Universe just 850 million years after the Big Bang – explained Cristian Vignali, associate professor at the University of Bologna among the authors of the study – represents a sensational discovery, the result of years of research conducted by our group and made possible by Chandra’s observational ability. Identifying other highly obscured quasars similar to this at a time when the Universe is still very young will be one of the main goals of astrophysics in the coming years “. The study – published on Astronomy & Astrophysics – stems from a collaboration of several researchers of the INAF – Observatory of Astrophysics and Space Science of Bologna and of the Department of Physics and Astronomy of the University of Bologna.

These objects are of great interest to the scientific research as they allow us to study the first evolutionary phases of the Universe.