The future of space exploration is (also) female

The first all-female spacewalk is the next goal to reach 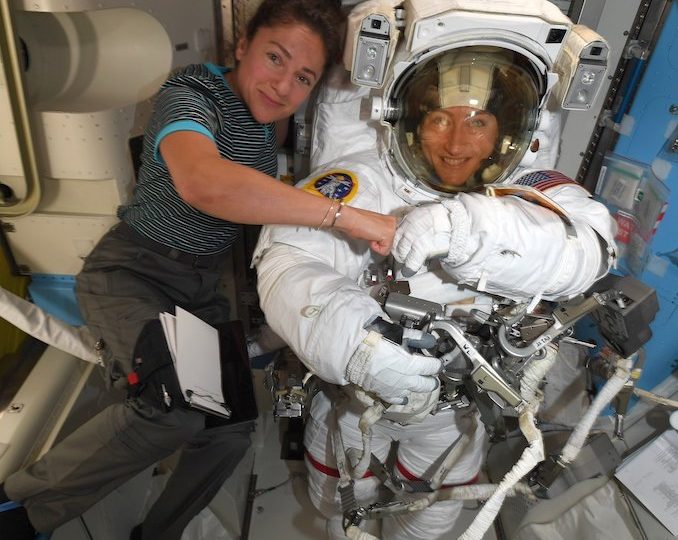 This time it will take more than an oversized space suit to stop the first all-female spacewalk. Anne McClain and Christina Koch were due to carry out renewal operations outside the International Space Station (ISS) a few months ago, but the two US astronauts did not have the honor of being the first two women to do an operation together extravehicular in space due to a problem with the size of spacesuits.

On October 21st, Christina Koch and Jessica Meir, who is onboard the ISS again from October 3rd, will try again the business, and this time the suits are there. The success of this operation, technically routine but symbolically important, shows how much women play an increasingly large role in space exploration.

The mission. The EVA (Extra Vehicular activity) of the two astronauts will be part of a set of 5 excursions that will have the purpose of replacing 48 batteries with another 24 new-generation lithium-ion batteries, more efficient and capable of powering the entire station one once loaded through the solar panels.

In its early days, the space race was a male issue. Although in the Soviet Union the first woman flew relatively early, Valentina Tereshkova, in fact, went into space in 1963, it took almost another 20 years for another woman to fly, revealing the propagandistic nature of the Soviet mission. The first American in orbit was Sally Ride, in 1983. To see the Italian premiere, instead, we waited for 2014, with the mission on the International Space Station by Samantha Cristoforetti. With time, the role of women in the space sector, not only astronauts therefore but also in research, engineering, administrative and relevant departments have increased considerably.

The near future. What to expect after the first walk for women only in space? What are the next goals to reach? NASA, with the Artemis program, plans to bring the first woman to the moon. But that’s not all: in a recent interview NASA’s chief administrator, Jim Bridenstine, stated that the first human footprint on Mars could be of a female astronaut. The future of space exploration is increasingly pink.

Impactscool e WeWork in the name of the future

In Milan there is a new space to talk about...

According to the Google CEO, artificial intelligence must be regulated

Imagine the future and win the Future Camp