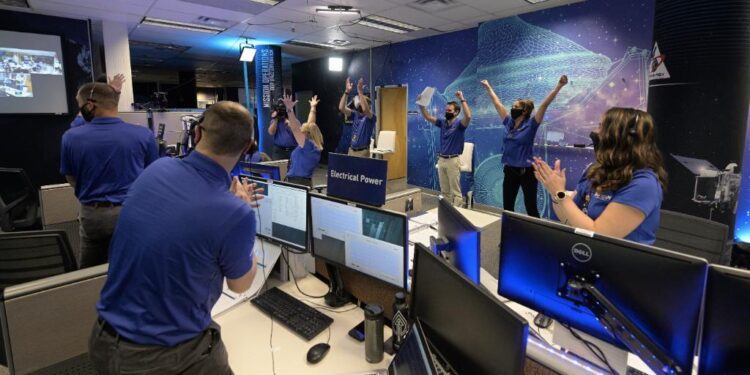 Today, Tuesday 20 October, OSIRIS-Rex has accomplished a historic feat. The probe successfully performed the Touch-And-Go (TAG) maneuver, during which it approached the surface of the asteroid Bennu, more precisely above the site called Nightinale, taking a sample of rocks and dust from the asteroid. After the historic success of this maneuver, the probe will begin its journey to return to Earth and deliver the collected sample to us. But first there are still many things to know.

OSIRIS-REx (Origins Spectral Interpretation Resource Identification Security – Regolith Explorer) probe was launched in 2016 aboard an Atlas V vector and reached the asteroid in 2018. Since then it has been orbiting it, studying it and looking for the appropriate site to perform sampling. Bennu falls under the Near Earth Object (NEO) classification, believed to have formed only 10 million years after it formed in our Solar System. This data leads scientists to consider the study of the celestial body in question useful to refute or strengthen current theories on the origin of life on planet Earth.

Over the years in which the probe has remained in orbit around the asteroid, it has been possible to study this celestial body in detail, which has proved to be rich in organic compounds with traces of carbon. Some have also been observed from the orbit at the Nightinale site, and it is thought, with some luck, that there may also be some in the sample of rocks brought back to Earth. If this were the case, the material collected by OSIRIS-REx would become one of the most important rock samples ever studied by man.