Milkomeda: the “supergalaxy” to come

In 4 billion years, the Earth may no longer be in the Milky Way, but in a new galaxy 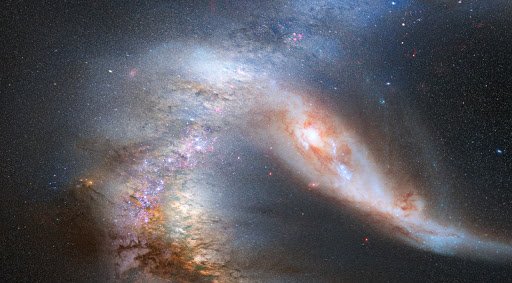 A new international study, coordinated by a team from the Physics Department of Sapienza University of Rome, has created sophisticated numerical simulations to predict the cosmic times in which our Galaxy will collide with Andromeda until it merges into a single “supergalaxy”. results of the work, which shed new light on the fate of our star system, were published in the journal Astronomy and Astrophysics

Our galaxy belongs to a cluster of galaxies called the Local Group, made up of about seventy star systems, most of which are relatively small. The center of mass of the Local Group is located in a point between the Milky Way and the Andromeda Galaxy, which are in fact, together with the galaxy M 33, its main components.

Modern astronomical observations suggest the existence within both the Milky Way and Andromeda of supermassive black holes, with a mass millions of times greater than that of our Sun, which in turn weighs about a million times the Earth. Not only that, the position and relative speed of the two galaxies allow us to hypothesize a future collision between the two systems that raises numerous questions about their destinies and those of their respective black holes.

How to create a new galaxy. Today, a new study coordinated by the Physics Department of Sapienza University of Rome, in collaboration with the University of Heidelberg (Germany) and Northwestern University (USA), provides the answers to these questions and identifies the cosmic times in which the clashes between the two galaxies and their black holes.

The work, published in the journal Astronomy and Astrophysics, suggests that in about 10 billion years the Milky Way and Andromeda will merge into a single “supergalaxy”, which could be called Milkomeda.

The researchers arrived at these results through sophisticated numerical simulations, which were carried out with a high-performance computing system available to the theoretical astrophysics group (ASTRO) of the Physics Department of Sapienza.

“In a time that is certainly long compared to human times, but not enormous compared to cosmic ones, the two galaxies will collide and merge into a single supergalaxy, Milkomeda – explains Roberto Capuzzo Dolcetta della Sapienza. “The first collision between galaxies will take place in 4 billion years and the merger in about 10 billion years, a time curiously similar to that which is the estimate of the age of the Universe, ie from the Big Bang to today”.

The data obtained also allowed the researchers to predict that, following the galactic collision and merger, the respective supermassive black holes of the two galaxies will find themselves orbiting close to each other.

“This implies – adds Roberto Capuzzo Dolcetta – that in a time a thousand times shorter than that necessary for the collision of the” mother “galaxies, the black holes will collide in turn giving rise to an explosion of gravitational waves of unimaginable power, billions times greater than those recently identified by the large interferometric gravitational observatories of the international LIGO-VIRGO collaboration in the United States and Italy “.