The textile industry among the most polluting realities: sustainable fashion is growing

Pollution is increasingly a threat not only for our health but also for our future and for that of the planet. Among the very many sources of pollution, the textile industry contributes substantially. 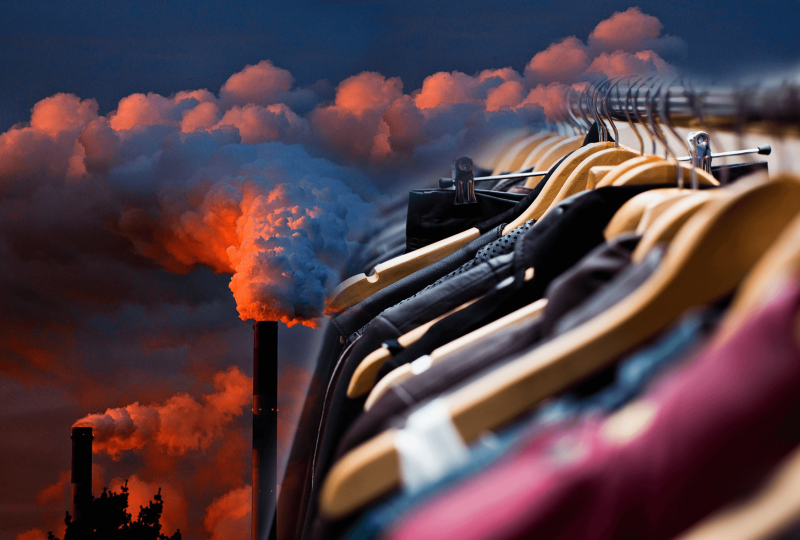 Our favorite t-shirt, the jeans that doesn’t fit anymore and those shoes that we rarely use, if built or dyed with polluting materials, have contributed to damage and consume vital resources. Suffice it to say that, even by just washing our clothes, every year we release half a million tons of microfibres into the ocean, the equivalent of 50 billion plastic bottles. The dyeing of fabrics, on the other hand, appears to be in second place among the major causes of water pollution on the planet: just think that to make a pair of jeans 7,500 liters are required. Emissions of greenhouse gases are added to pollution: 8% of global emissions are attributable to the clothing and shoe industry. If this data is still not enough, a clearer idea comes from the Ellen Mac Arthur Foundation, according to which the textile sector, with its annual 1.2 billion tons of CO2 emissions, exceeds the sum of emissions due to air or maritime transport.

The environmental impact of the fashion industry, however, does not stop only with the production of clothing but also continues in the homes of those who buy them. This is the damage of an increasingly linear society, prey to “throwaway” fashion. All it takes is a simple click to buy new trendy clothes that we stop wearing in even less time. So the planet not only undergoes the choices of producers who are not attentive to environmental problems, but also to consumers who are not aware of their purchases. A survey of the fashion business “The State of Fashion 2019” made by Bof-McKinsey opens our eyes on this very panorama: the average consumer buys 60% more clothes than 15 years ago, keeping them for a shorter time. In fact, an English girl out of three considers clothes even old after having worn them once or twice, considering it is not good to be immortalized in more than one photo with the same outfit. To date, 85% of the clothes produced end up in landfills, while only 1% is recycled. Some call it therapeutic shopping, for others it can be a real disease. In any case, only the planet that finds itself using precious resources for garments that always have less duration in people’s wardrobes is always affected.

Something is moving. With the signing of the Charter for the climate action of the United Nations by the Vf Corporation, the world’s largest clothing company that includes major brands including The North Face, Vans, Eastpak, Timberland and Napapijri, something is changing. Sustainable fashion, the production of clothes respecting the environment and workers, is becoming more and more popular. According to some data from Lyst, the global fashion research platform, the increase in interest in sustainable fashion is expanding all over the world with the top spot in the ranking reserved for Finland, while Italy appears in 12th place with an increase 78% of purchases of sustainable clothing from October 2018 to March 2019.

There are many brands that in recent years pay more attention to the development of sustainable garments and some of these are rewarded at the Green Carpet Fashion Awards, an event that arrived last year at the second edition, held at the Teatro alla Scala, by the Italian National Chamber of Fashion and Eco-Age with the support of the Ministry of Economic Development, ICE Agency and the Municipality of Milan, with the aim of rewarding the commitment of fashion houses on sustainability. Companies that put into practice new ideas and less polluting alternatives. Such as thebrand Wrad which has managed to have important results in the field of dyeing using natural and recycled graphite. It is his entirely sustainable invention of garments made with Mint Fiber. On the Green Carpet, among the winners, there were also the artisans of Ferragamo who created the dress worn for the occasion by Julianne Moore, present at the ceremony, woven with an innovative material obtained from the plastic recovered from the sea and transformed into yarn. Even a company from Bolzano called Frumat leatherfaux leather that received an award for its extraordinary ability to make a material called Apple Skin: an entirely vegan way to create shoes, made with organic apple peels and cuttings discarded during the industrial processing.

Beyond the winners, there are many other curiosities that are born within the world of sustainable fashion, such as Orange Fiber, a Catania start up that uses pastazzo, that is the waste of Sicilian oranges, for the creation of fabrics, or the brand Waistemade of Cigognola Pavia that recycles used bicycle tires to make eco-sustainable and vegan belts. Even Ecodream, a company of Borgo San Lorenzo in Florence, he developed the idea of reusing textile production waste and inner tubes to produce quality bags. Ethical jewels made with recycled material are also born, in order to avoid the pollution produced by arsenic and mercury, usually used to produce gold and diamonds.

There are also those who do not stop only at the production aspect but ask their customers to act. Like the brand Timberland that in its stores for some time now has been placing containers for customers who want to throw shoes that no longer use any brand and in any condition. The latter are then collected and take on new life for the production of other items. Burton Italia, a leading company in the field of snowboarding, in addition to greater attention to sustainable fashion, organizes open days for everyone to clean up the mountains together from the waste that has accumulated during the winter.

It is not easy to change the habits and the mentality of the people, but certainly, one can help them to understand how much it can make the difference not to throw clothes that they simply don’t like anymore. Everyone can live a new life. It is important that the concept of sustainable fashion continues to develop along with everything that contributes to the elimination of environmental pollution, because otherwise the problem will no longer be “I have nothing to wear”, but it will be “I do not have an environment in which to live “.

Valentina Cosenza is a graduate in Modern Literature at the University of Milan and is passionate about writing and reading. Journalist at The Week of Saronno deals mainly with current events, news stories and cultural events. N

The textile industry among the most polluting realities: sustainable fashion...

Our favorite t-shirt, the jeans that doesn’t fit anymore and...

In an increasingly digitized and ever-changing world, it seems paradoxical...