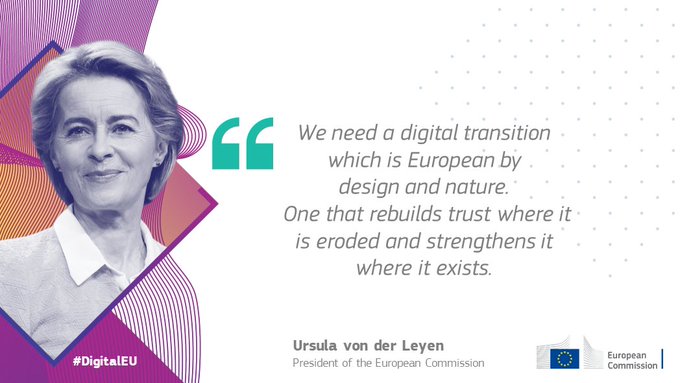 Digital transformation is profoundly changing our society and people’s lives. The European Union is aware of this and after having worked, with the help of a pool of experts, on drafting a series of guidelines for the ethical development of artificial intelligence, presented its strategy on the future on February 19 in Brussels of digital. The objective of the plan is to guarantee benefits to people and companies at a community level and to promote the achievement of climate neutrality by 2050.

The plan was presented by EU Commission President Ursula von der Leyen who commented through her Twitter profile: “In Europe, we have all what we need to shape our digital future. With the #DigitalEU strategy we adopted today, we want to give each European, each business, and our industry and societies the chance to fully benefit from the digital transformation”.

Executive Vice-President of the EU Commission Margrethe Vestager and EU Commissioner for the Internal Market Thierry Breton then delved into the content of the plan, based on three main actions: how to shape the European digital future, trust and excellence in the artificial intelligence and a European data strategy.

Technology at the service of people. The first of the three actions, which perhaps summarizes the meaning of the entire document, is dedicated to the centrality of people in this digital transformation phase: individuals must be able to benefit from innovation, be able to access technology and be protected from cyber threats. In addition, technologies must encourage the emergence of an open, democratic and sustainable Europe, including on an environmental level, using technology both to reduce emissions both from human activity in general and those generated by technologies in particular.

AI and the challenge to the United States. The first objective is to attract investments in this sector, for a total of 20 billion Euros. “I am an optimist of technology. – said Ursula von der Leyen – I believe in technology as a force for good. The European Union must be able to make its choices, based on its values, respecting its own rules. This is what I call a technologically sovereign Europe. ” This statement implies the desire to contrast the US hegemony and to enhance European excellence, particularly in the industrial sector. However, there is no lack of references to the dangers and the need for ethical guidelines in particular for applications defined as “high risk” such as facial recognition.

Data: a single and common market. GDPR alone is not enough: within the plan, an important part is dedicated to data, the central element of digital transformation and the development of the aforementioned artificial intelligence. The novelty is the choice to allocate and share them, creating a single market for data that is based on fair, clear and shared access rules, which are integrated with GDPR, privacy regulations and the right to the competition.