Visionary Days 2018: will everything be just human?

On December 1st in Turin, the second edition of the event that looks to the future 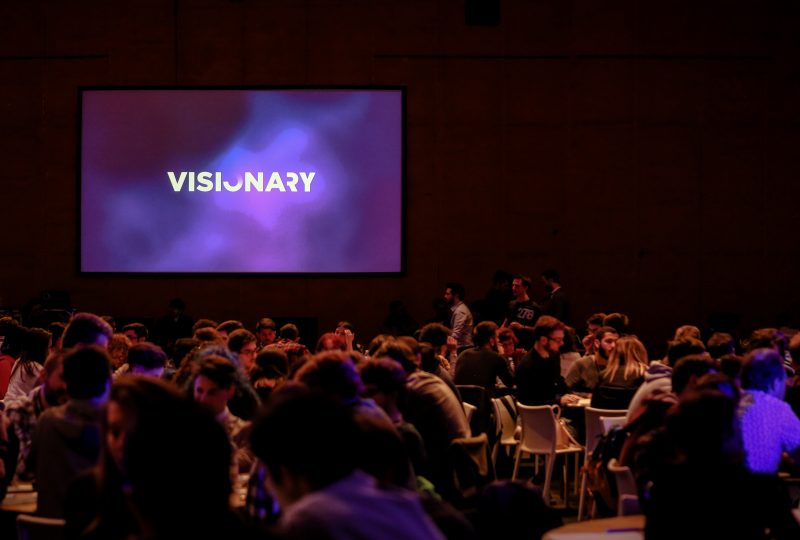 A collective experiment to discuss the future and collect the visions of 600 young people around the theme “Everything will be human only?”. It is Visionary Days, the innovative event that, in its second edition, will take place on December 1st, from 9 to 19, at the OGR – Officine Grandi Riparazioni in Turin. 10 hours of meeting and debate, divided into 4 thematic sessions and introduced by exceptional speakers. The participants will bring their visions of the future in 70 different tables, coordinated by moderators chosen among the students of the University and Polytechnic of Turin. The work of the day will culminate with the drafting of a live book: a volume written in real time by an editorial staff assisted by an artificial intelligence system, which will allow selecting the information coming from the different tables, translating them into a real book.

Impactscool is a Community partner of the event and on December 1st, it will be in Turin to experience this reality and interview guests and participants.
In the meantime, however, we interviewed Carmelo Traina, one of the founders of the event.

How was the project born?

The project was born of four young people in the first months of 2017. We attended the Polytechnic University of Turin and we decided to participate in a call for the creation of an initiative aimed at students. There were 8 thousand euros up for grabs. The commission did not choose our initial idea, focused on engineering. Fortunately, for us, however, the winning workgroup was unable to carry out its project and the commission recalled us. After a confrontation, however, we abandoned the initial idea and Visionary Days was born.

What was the goal?

Create an opportunity for meeting and sharing for the new generations, with the theme of the future at the centre. An event in which the young were the real protagonists and in which they had the opportunity to discuss their idea of the future. Putting together different experiences, we created this format, which combines the concept of “inspiration” typical of TED style talk and creativity and the desire to make hackathons. At the end this format was born: several sessions, inspirational talk and then provides a long comparison, for a total duration of 10 hours.

How did you go from idea to realization?

We realized after a very short time that the 8,000 Euros provided by the announcement were not so much. We have managed to implement the budget and we have set out to form a good team and find a location that could meet our needs. So on 11 November 2017, there was the first edition of Visionary Days, whose theme was “Communicating in the future”. We had over 400 participants and a very positive feedback.

A peculiarity of Visionary Days is also to leave something, even physical, to the participants…

Exact. Many events offer great inspirations but once finished, the participants always have the feeling those nothing-concrete remains. For this reason, we deliver to all participants a “booklet”, last year of 72 pages, which contains the visions born during the event. It is a live book, realized through the real-time synthesis of the comparison of all the tables by an editorial staff supported by artificial intelligence.
Visionary Days, however, is above all the meeting point between many people who, even if in small part, can have an impact on the lives of others. From the comparison, in fact, ideas and even two startups were born, but in general, there emerged possibilities for the future that, without that meeting, would not have materialized. Therefore, our value is not the book itself, but the meeting and the debate about the future.

The project, however, has also evolved on other channels, is it correct?

After the first edition, there was a lot of enthusiasm and, not being able to realize the second edition in a very short time for logistical and organizational reasons, we decided to channel the energy in another way. We have created a Facebook group, in which we have revived the community that has created this experience from week to week, stimulating debate and proposing visions. This work also served us to lay the foundations for this second edition of Visionary Days, which has even greater ambitions than the previous one.

What to expect then from the 2018 edition?

The event, scheduled for December 1, will have 600 participants, 70 discussion tables and will be in a much larger and beautiful location. The theme will be “Everything will be human only?” and we will focus on the encounter between man and technology, going from the medical field to artificial intelligence and machine learning, up to the application of genome editing. There will be some exceptional speakers, who will bring their visions to “inspire” the participants, but above all, there will be plenty of students ready to discuss the future.