Everest could be, among the most extreme places, one of the most polluted, and global warming reveals things long hidden under the snow 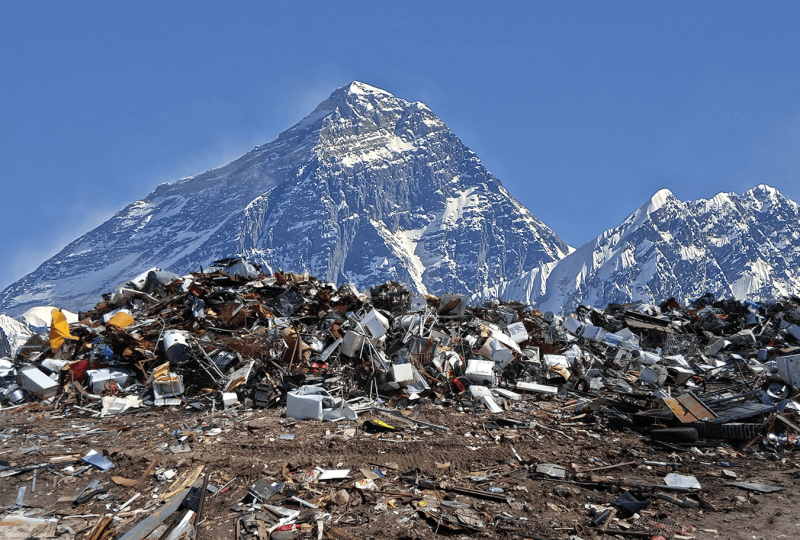 It is a trend that sherpas are increasingly observing: every year the snow, on Mount Everest, seems less thick and in some places, among the brilliant white of the immaculate snow, flashes of phosphorescent yellow, leaf green, and ocean blue appear. Colors foreign to this frozen world that dot the places where climbers – that increase in number every year – leave garbage, used equipment and, unfortunately, sometimes life. With global warming, such findings are increasingly common and the resurgence of garbage, waste and bodies poses a serious health problem for Nepal.

An unpleasant surprise in the snow. Every climber, it is estimated, leaves on the highest mountain in the world between 10 and 15 kg of garbage, including feces. Precisely the latter pose the most serious problem, with the melting of the snow the bacteria present within them, first frozen and unarmed, return active and filter into the ground where they reach the aquifers of the area: in fact are not rare, among climbers and villagers downstream, cases of intestinal diseases. Transporting these droppings to the slopes of the mountain is an almost impossible job, which in part falls on the shoulders of the indefatigable sherpas, who transport them in special blue barrels. With the increase of tourists and the melting of snow that reveals new deposits, perhaps decades old, however, new and permanent solutions are needed. One of these is the Mount Everest Biogas Project, which involves the construction of a miniature biogas plant capable of managing human waste and at the same time generating methane that can be used from the base camps for heating and cooking food.

A mountain of waste. It is not a problem of health alone. All around the different base camps that serve as stops, materials, cans, plastic left by climbers, are dumped in dozens and dozens of large holes up to 100 square meters. Waste that is very difficult to recover: the helicopters cannot reach the highest base camps, the only way is on the shoulders of the sherpas. For this reason, the Nepalese government has organized a 3-month expedition with 14 men with the task of recovering 10 tons of garbage, a heavy task that must be done to preserve the Everest environment.

Sad discoveries. Especially towards the last base camp and on the way to the top, above 6000 meters, there is another type of finding, definitely more macabre. The bodies of the climbers who did not make it, who must remain where they fell because trying to recover them would put other people’s lives at risk. Despite this, often the families of the climbers are pressuring and are willing to pay tens of thousands of dollars to get back the bodies of their loved ones.

The climate crisis is rapidly changing the appearance of Everest and of the entire Himalayan chain, the perennial snow line is moving ever higher, leaving behind the symbol of human arrogance in the form of waste.