Piero Angela wants to “Build the future” with young generations

Thanks to the format devised by the well-known science writer, many young Italians are approaching fundamental issues to understand the world of tomorrow 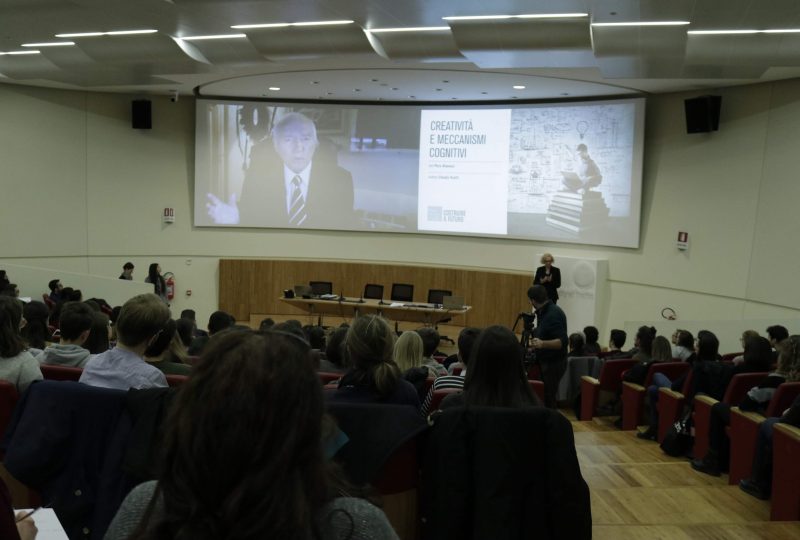 He just turned 90 years old, but he keeps the spirit that has distinguished him throughout his professional career: the desire to stimulate curiosity and bring people of all ages to knowledge. Piero Angela, great protagonist of scientific divulgation in Italy for the last 50 years, has decided to dedicate himself in particular to young people, as he defines them as “the future ruling class”, with a format aimed at young people of the last years of high school and to the university students.

“Building the future”, this is the name of the initiative, was born with the aim of expanding the training of young people, beyond the school curriculum, and offering them the opportunity to reflect on the great technological, economic and cultural transformations taking place. “Building the future” in 2019 also arrived in Trento, thanks to the collaboration with the Bruno Kessler Foundation and the University: a cycle of 10 conferences, aimed at 300 students, in which some of the great protagonists of the present take part in the world of science, sociology, medicine, journalism, economics and entrepreneurship. The first round of the cycle, with the writer and scientific journalist Piero Bianucci, took place on January 11th and was a great success.

Piero Angela, absent in Trento because of a knee problem, is still involved during the press conference for the presentation of the project and brought his greetings to the students present in the classroom during the inaugural meeting.

“Today – said Piero Angela – an increasing number of choices and decisions that have to do with both daily life and global aspects depend on information and scientific knowledge. These can help us understand where the world is going. But knowledge alone is not enough. To build the future, we need a creative vision based on research, sustainability and participation “.

According to Angela the knowledge and the ability to manage the fruits of this knowledge travel at different speeds: “We must try to have a culture always synchronized with the speed with which changes occur. The young people who are around 20 years old now, in 2050, which seems so far today, will be fifty-year-olds in the midst of their physical, mental and social activity, who will face a completely different world to that of today. The purpose of these lessons is to explain to the students that even if we cannot foresee the future, we can study the trends of the present to understand the direction in which we are going “.

What must change is also the world of education and training: “We live an increasingly long life, it is as if we lived so many lives, one after the other. We form ourselves only in the first years of our life, but this is not enough. The school has and will always have a fundamental role, but we need to enrich ourselves even outside of it. In general, we need much richer information: the Internet allows us to be connected everywhere, but how do we use this tool? Do we really spread knowledge, awareness and use it to improve the quality of life? Emotionality ends up eating information, as well as culture. We need to find a system that allows us to be attractive but at the same time allows us to spread knowledge and ideas”.

Finally, a reflection on young people: “Students who do not study, do not work and do not do training are the reflection of a deeper crisis, which affects the whole country. The people we address in these meetings will be part of tomorrow’s ruling class, they will be those who will have to take on important choices for everyone”.

The satisfaction of FBK and University. “Building the future” also arrived in Trento thanks to the collaboration with the Bruno Kessler Foundation and the University. From the words of the President of FBK Francesco Profumo and of the Rector of the University of Trento Paolo Collini, the satisfaction of having brought this initiative to Trento also emerges. “In our country – explained Profumo – the theme of orientation for university studies is often underestimated and an important percentage of students’ failures is due to choices that are not always aware of the selected course of study. The Building the Future initiative is a model of active orientation. Students will be able to talk with the speakers, get information, ask them questions and then proceed with greater awareness towards the choice of the university degree course. We will create an Association of the former Alumni of Building the Future – Trento, to follow them on their university path and to evaluate the effects of the initiative on their university achievements “.

“This initiative – underlined the rector of the University of Trento Paolo Collini – offers us the opportunity to nurture young people’s curiosity towards knowledge. That curiosity that is a fundamental ingredient of research. But that is also a stimulus in their studies and in the choice of university that many will face. We want to accompany them and encourage them to put knowledge at the center of their lives “.

At the end of the press conference, Francesco Profumo and Paolo Collini also dedicated a thought to Antonio Megalizzi, a Trentino student and journalist who died in the terrorist attack in Strasbourg on December 11th, 2018. “At today’s meeting – said the two – perhaps Antonio Megalizzi would have come, because he was a young man who worked in the future. One of those young people we talk about too little, with great values, for our society”.