Modern Utopias and work: “Robot of the world, unite!” 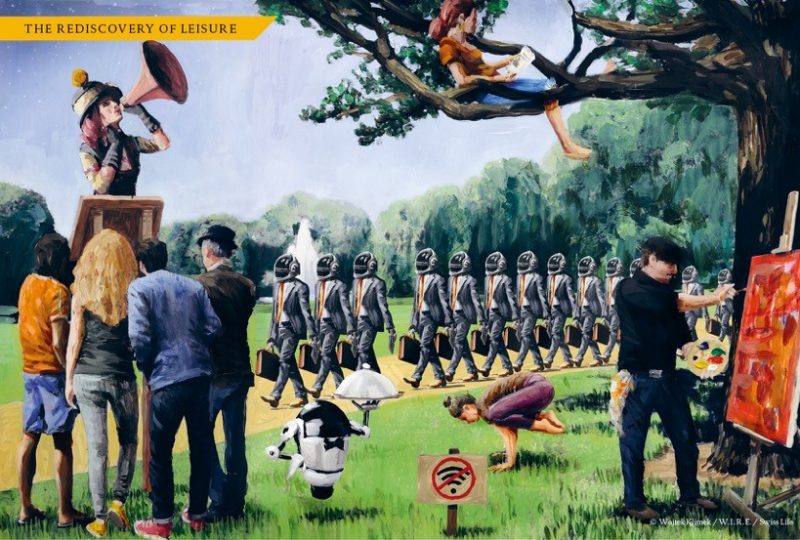 Karl Marx was born 200 years ago but his thinking is still very current and he is experiencing a rebirth through the fourth industrial revolution. From Silicon Valley to China, many experts in technology and artificial intelligence, in a more or less explicit way, take up and make Marxian thought their own and present it in a new light

In spite of the instrumentalization of the communist totalitarian regime, the thought of Karl Marx is able to grasp deeply some of the key themes of the modern debate on work and our economic system. 200 years after its birth, the media around the world are talking about the genius thinker by brushing up with the occasion his contribution, very current, to the field of political economy.
Marx as a political activist perhaps failed to understand how to influence the future with his historical materialism, so much so that he found himself modifying his approach in the different phases of his thought, reacting to the course of events.
We can’t deny, however, that one of his great gifts was certainly the acute ability to observe the present and to grasp its tendencies from small and great signs of change, of which he became an interpreter with his intellectual work.

Marx, communism and artificial intelligence: a Chinese vision
In a recent article published in the Washington Post, Feng Xiang, an experienced university professor of law, introduced the issue of unemployment arising from the increasing application of artificial intelligence in the following way: “The most momentous challenge facing socio-economic systems today is the arrival of artificial intelligence. If AI remains under the control of market forces, it will inexorably result in a super-rich oligopoly of data billionaires who reap the wealth created by robots that displace human labor, leaving massive unemployment in their wake”.
This, according to his vision, would not be the only possible evolution and the answer would be in the hands of the Chinese socialist economy. In fact, “If AI rationally allocates resources through big data analysis, and if robust feedback loops can supplant the imperfections of “the invisible hand” while fairly sharing the vast wealth it creates, a planned economy that actually works could at last be achievable.”
Artificial intelligence would, therefore, be the ideal instrument for putting an end to capitalism. Feng Xiang advocates a nationalization of artificial intelligence and the most innovative technological solutions as the only way to avoid mass technological unemployment.
The article closes provocatively: “If properly regulated in this way, we should celebrate, not fear, the advent of AI. If it is brought under social control, it will finally free workers from peddling their time and sweat only to enrich those at the top. The communism of the future ought to adopt a new slogan: Robots of the world, unite!“.

Marx and the machines
If Marx certainly didn’t talk to us about artificial intelligence, having lived a century before its development, we can’t say the same of automation in general.
But let us proceed in order to understand the thought of the political philosopher.
According to Marx, capitalism has some macro tendencies intrinsic to the system and one of these is that of automation. He observes, in fact, that in order to increase profits, the capitalist is in a certain sense forced to increase productivity and can do so by adding total hours worked, or by investing his profits in the innovation of the production process. This means focusing on technology and automation that make the process more efficient and lower the cost of personnel.
This creates a wave mechanism that frees up resources (workers) that become part of what Marx calls “the reserve industrial army”. This creates a mechanism that frees up resources (workers) that become part of what Marx calls “the reserve industrial army”. The workers are reabsorbed in a subsequent phase of increased production, until a new phase is grafted. The number of people reintegrated, however, is lower than that of the excluded workers in the first phase and the result, therefore, is that this army becomes bigger with time. To say it with the words of Stefano Petrucciani (Marx, Carocci Editore): «(…) the second tendency will prevail, that is the one towards the growing creation of surplus labor, but it will not be affirmed in a linear way, but through a process cyclical contraction and expansion of the excess labor force itself. ”
Here the tendency to automation leads to the so-called “technological unemployment” so much discussed in the contemporary world.
Marx, however, does not stop here and, among other things, draws from it the conclusion that a world now a slave to the law of capitalist accumulation can only lead to a centralization of capital in the hands of a few great actors. And it’s an undeniable trend.

Address the problem by looking in the right direction
But be careful: as Petrucciani reminds us, if we read the Capital we will be called to task. The equation would not be “more machines = more unemployment” but “capitalist system = unemployment and alienation”. The interesting point is that, according to Marx, we must look at the economic system and not at automation to find the real cause of the problem, as also mentioned by the two MIll, McCulloch, Torrens and Senior.
We should, therefore, start from a careful observation of society rather than from technology to understand the problem.
Capitalism or not what is important to emphasize in my opinion here is that, to analyze the problem of technological unemployment, we should start looking at men and not at the machine. Because it is only by trying to understand our nature that we can try to outline future developments by keeping our core values firmly in place.
Important in this sense is precisely the vision of the future that we want to pose as an objective attainable.
Returning to Marx, one of the most discussed aspects by Hannah Arendt compared to the system he built, is precisely the vision of the future. According to him, it would be contradictory to have identified in the work the main feature of human nature and to have outlined a constantly changing history, to then imagine and hope for a static future where man gets rid of work. According to Marx, in fact, in the final phase of history, we would find ourselves living in a world where, to quote Petrucciani again “poverty and antagonism cease and” free development of individualities “and” the reduction of the work necessary for society ” to a minimum, to which then corresponds the formation and the artistic, scientific development, etc. of individuals thanks to the time that has become free and the means created for all of them”.
We can’t fail to notice that these words may have been pronounced today in Silicon Valley by one of the many supporters of the concept of income of universal citizenship, in order to provide financial support to those who lose their jobs in favour of algorithms and machines. Those of this philosophy, in fact, maintain that we will live in a world of abundance and that we will devote ourselves to art, knowledge and culture, finally free from work once and for all.
But are we sure this is the only option? How many civilizations of the past had social classes perfectly able to dedicate themselves to personal growth in their free time and did not create innovation, art and culture?
What is really human nature that would prevail in such a situation? Only by understanding if industriousness and work are a fundamental part of our nature can we really understand if we can imagine a society free from work and hard work. We must, therefore, look in the right direction to approach the problem.
Let’s start again from human nature, from society and from the needs on the basis of which it has developed as it is today and try to imagine new forms of social interaction, new ways of doing business and conceiving work as an expression of our personality.
When innovating it is always essential not to lose sight of the need to which a particular solution is able to respond in order to find new ones. When we talk about innovating the world of work we should start from the same premise, to be able to give an answer that is lasting and truly achievable.