Enerbrain is bringing a minimally invasive technological system to the world to improve financial performance, building comfort and environmental sustainability 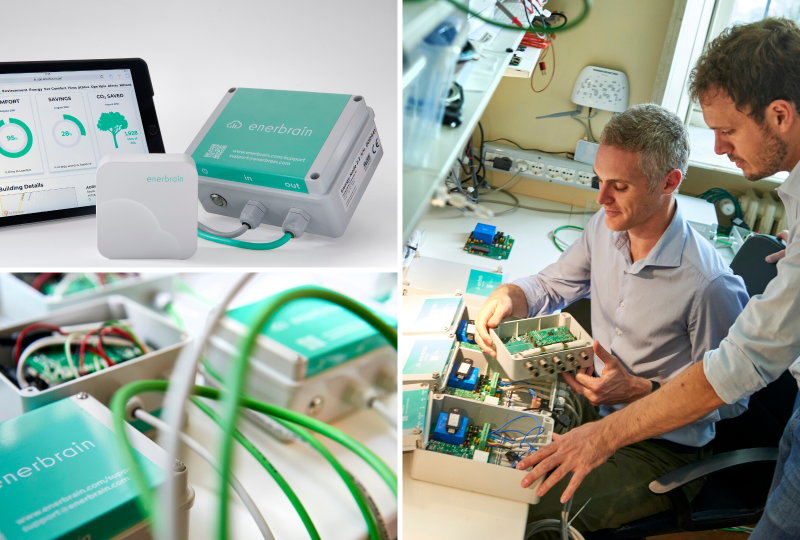 Air pollution continues to reap victims and recent studies have shown that living for a long time in a city with high levels of fine dust or in one with low air quality has serious long-term consequences on the health of our body. If, on the one hand, there are many initiatives in terms of mobility, to limit the movement of cars and encourage the use and spread of electric vehicles, it is more complex to intervene directly on the buildings. These, however, have a very strong impact both in terms of energy consumption and in terms of emissions.

Enerbrain, an Italian company born in Turin in 2015, has developed a technological and minimally invasive solution to improve financial performance, building comfort and environmental sustainability.

The air quality in our country is not the best, far from it: in Italy bad air quality causes more than 80 thousand deaths a year, one of the highest values ​​in all of Europe. The areas with the greatest presence of fine dust are the areas of the Po Valley – in particular around Milan and between Venice and Padua -, then Naples and Taranto.

Turin is also among the most polluted centers in the country: Enerbrain was born in the Piedmontese capital, a reality that is bringing the value of Made in Italy innovation to the world.

We talked about it with Giuseppe Giordano, Co-founder and CEO of Enerbrain.

You deal with optimizing the consumption of buildings. What is their environmental impact?

Buildings consume around 40% of the world’s energy and release emissions for around 36% of the total. Very high numbers: the indicators, however, tell us that 30% of this energy produced is actually wasted. It is a paradox: on the one hand, huge consumption and impacts, on the other, constant waste and not always comfortable spaces for those who frequent them. This is where the Enerbrain project comes from.

When was your reality born?

It was born in Turin in 2015 by the initiative of four people, all with different backgrounds but united by the sector in which they operated, that of energy. I, in particular, was busy in Texas on an energy monitoring project while Marco, who we can define a bit the father of the idea, was working on optimizing the consumption of the home boiler: he had realized that the sending knob was a fixed parameter. He found that through a calculation he could modulate and adjust the power to ensure constant comfort.

What changes compared to the traditional approach?

The thermostat turns the boiler on or off, does not regulate its intensity. Our approach has proved to be very interesting for domestic use but even more impactful for large buildings, where different levels of occupation and different times of the day can significantly change the conditions inside a space.

We went directly to the largest building that we could reach at that time, the Lingotto in Turin, a former FIAT factory, today a 30,000 square meter shopping center. We proposed a study with a pilot project, collected a first round of investment and with this money we created the prototype. We installed it and signed a performance contract with this first customer: all the savings generated by optimizing consumption were shared with us. The formula worked: we were able to bring savings of around 30% of the bill, but above all we led to an improvement in environmental comfort. This is an aspect that is also reflected in business.

If a person is not comfortable in a place, he tends to leave earlier: for example, if we are cold in the restaurant, we will probably go away without eating dessert. Industry studies tell us that if a customer stays an hour in a shopping center, he spends 100, if he stays for two hours 230: the stay time is more than proportional to the expense.

So who are your customers?

Our customers today are on the one hand the public administration, an important part of the real estate assets of cities with a large influx of people, and on the other private individuals, from shopping malls to museums, from offices to theaters, from hospital complexes to places for events. Our patented approach allows you to integrate the system into any existing system in just a few hours.

How do you work on the systems?

There are many ways to make a building more efficient, but these involve closing the spaces for weeks or months and making significant investments. Enerbrain, on the other hand, brings an intervention on the level of regulation, it is a weak link on which it is relatively simple to intervene. To give an idea of the speed and ease of installation, for the Municipality of Turin we have applied our system in 89 buildings in just 20 working days, without even having visited most of the spaces before.

This also demonstrates the scalability of the project and the ability to bring about an important impact.

How is the installation done?

We position our battery-powered environmental sensors that do not require special configurations. Then we install our control units on the heating system, on the machine, allowing you to manage the machine remotely. The principle is simple: we make IoT systems that are not.

So what is the contribution of emerging technologies?

Our system allows you to create a predictive model thanks to artificial intelligence and the internet of things. The sensors give us a picture of the environmental situations in real time, measuring air quality, temperature and comfort. These data are integrated into the cloud with other information such as daily energy consumption, weather forecasts, the number of people estimated inside the building and extract patterns. For example, the system wonders: “what happens in the restaurant area of the mall on Monday? And how does it change compared to the weekend? “. The model learns on the basis of experience and knowing the characteristics of the building (such as the time it takes to reach a certain temperature – editor’s note) it is able to proactively manage it: instead of reacting to conditions that occur, the building anticipates them.

There is a lot of sensibility today on the environmental issue. Has it benefited your business?

2019 was a year in which the environmental issue was central. This has also had consequences for our reality, this year we have also had several awards and the perception of public opinion on the topic has certainly contributed.

At the customer level, sensitivity to the environmental theme perhaps not for everyone is the first factor they turn to us, but companies also have a specific interest in communicating what has been done for the planet. From this awareness some education projects were born.

In some schools in the Municipality of Turin, in addition to installing the technology, we have carried out various awareness activities to tell what our contribution is and what happens inside the buildings where our technology operates. When there are such big issues it is important to make people understand what they can do, give them a perception of the consequences.

Our activities in Turin have produced a benefit equal to that brought by the planting of 100 thousand trees, in a city that has 110 thousand of them. Almost a doubling.

Imagine the impact if this were done in all the cities of the world.

By the way, where do you operate?

We operate in a dozen countries from four different locations. We have offices in Turin, Barcelona, Tokyo and one in Dubai opening. The challenge is the same all over the world.

The team is currently being expanded, we are an interdisciplinary group with 45 members but we don’t want to stop. One thing I like to emphasize that in the sector we have become a small representative of Made in Italy and its value.

What to expect for the future of the sector?

Cities have changed a lot in recent years and will continue to change. There is a need for technology and for the various operators in the energy sector to speak, in order to offer more services to people.

It is nice to work in the green tech area, you wake up in the morning knowing that you are doing something that has a positive impact, for the lives of citizens but above all for the Planet.