Impactscool’s commitment is my personal one on Climate Change

Andrea Dusi's editorial, returning from Atlanta where he participated in an event of the non-profit organization "The Climate Reality Project" 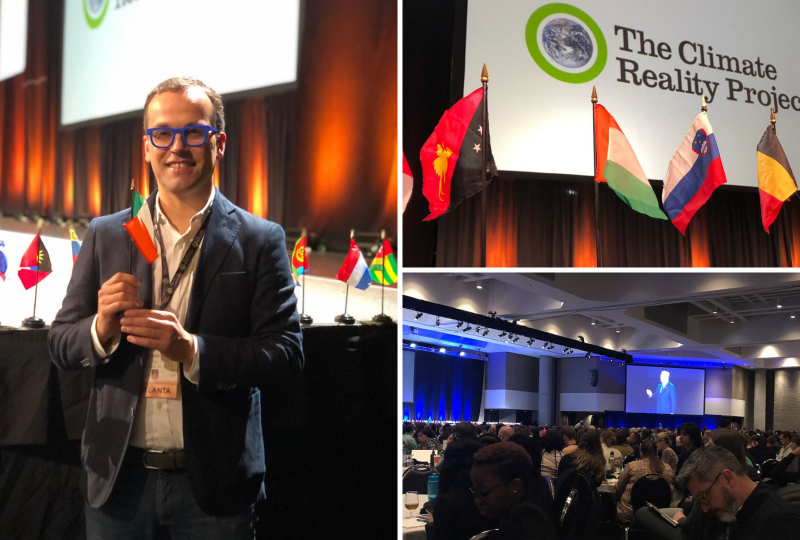 Last week I participated in one of the training courses of the non-profit organization “The Climate Reality Project”, created in 2006 by Al Gore, which aims to bring awareness on climate change in progress and concrete actions to avoid the point of no return.
The event took place in Atlanta, at the World Congress Center, and around 2,300 people from 90 different countries participated. I, along with another girl, Marina, were the only Italians present in this edition.

Why did I go there?
Since we sold Wish Days, the thrust I felt was strong in trying to leave a better world than I found it, or actually, how we made it. This was the strongest motivation that led us to choose the sale.
Impactscool was the way to channel this “mission”, which I also tried to accelerate by creating 10 Volte Meglio: I understood, however, that politics could not be the means by which to achieve this acceleration, indeed.
With Impactscool we take care to bring awareness about the future. For years, we have been talking about changes, exponential technology, innovation, ethics and we are discussing them with thousands of students.
Obviously, if you want to get to the best possible future, taking the climate issue head-on is fundamental. Even just to have a future.

We must “do”
Hence, the awareness that it is no longer enough to make scientific dissemination: I feel strong, as far as I am concerned, the need to become an activist on the climate issue, even if with more modern and innovative ways than we usually imagine this figure.
Taking part in a training event of the Al Gore organization has, therefore, become a natural step on this path. To get in touch with other thousands of people with the same vision (tens of thousands if we consider the over 17 thousand alumni in the network, all connected in an internal social network).
To learn through the stories and testimonies of scientists and industry experts. To stay up to date. To understand the different ways in which we can be “activists”.
To have additional energy for your projects and ideas.
Three days were very intense, beautiful and full of stimuli. Almost 10 hours of daily work, from 8.30 to 18, characterized by moments of speech, which had as their main protagonist Al Gore, able at 71 to stand on stage even 3 hours in a row with simply crazy communication skills, and workshops in who worked in a group, in an active and concrete way, on different themes.

What do I take home and what are the commitments I have given myself, both for myself and for Impactscool?
I bring home the urgency to act, as I said.
With the following commitments.

Together.
For the reader, the invitation I allow myself to make is to study/understand what is happening, starting from the basics: what is global warming and how does it work, what are the causes and behaviours that need to change to avoid destroying the human and animal race of the Earth.
Moreover, maybe make a small commitment, if possible daily, with which to start improving the Planet: the example of Greta shows us how a single person can leave a mark.
Never as today, we need, the Earth needs, of tens of thousands of these signs.