Why did we go to the moon?

50 years ago, the Apollo 11 mission brought the man to the moon for the first time. Why reach our satellite and what impacts this historic mission had? 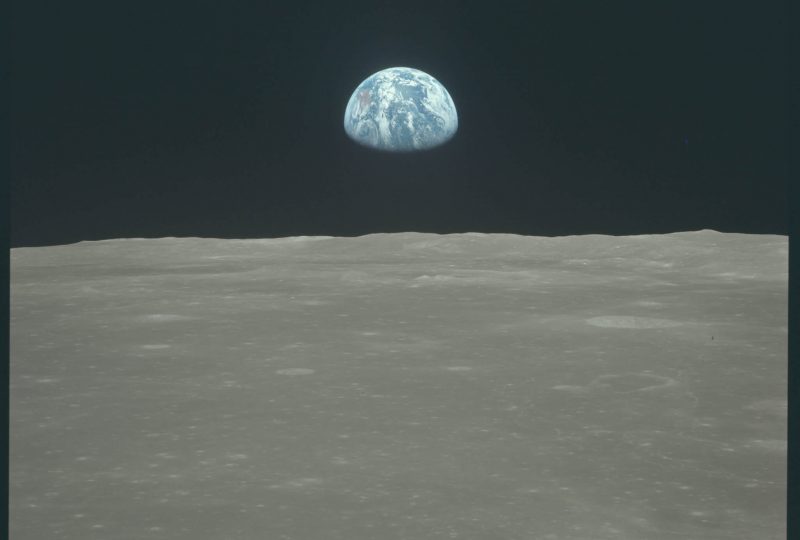 “I believe we’re going to the Moon because it’s in the nature of the human being to face challenges”. Neil Armstrong had clear ideas, his journey, along with his fellows Buzz Aldrin and Michael Collins, aboard Apollo 11 to the Moon was a challenge, one of the greatest challenges humanity had ever faced. To win this challenge, they would have to rely on more than 400 thousand people who worked on the project. An epic effort that began just over a decade earlier, in 1958, when NASA was founded, and dragged by the words of President Kennedy who in 1962, with the famous speech “we choose to go the Moon” inflamed the minds of a nation and officially started the space race against Soviet adversaries. Target: the Moon.

Why the Moon? The question everyone is asking, today as then, is the same: why do we go the Moon? What is there to gain? One of the reasons (besides clearly those of a purely scientific nature), perhaps the noblest – at least of a facade – can be extracted from the words of Kennedy:

“But why, some say, the Moon? Why choose this as our goal? And they may well ask why climb the highest mountain? Why, 35 years ago, fly the Atlantic? Why does Rice play Texas? We choose to go to the moon. We choose to go to the moon in this decade and do the other things, not because they are easy, but because they are hard, because that goal will serve to organize and measure the best of our energies and skills, because that challenge is one that we are willing to accept, one we are unwilling to postpone, and one which we intend to win, and the others, too”.

Kennedy’s words are just one of the aspects behind the Moon race. In this scenario, the other protagonists are the Soviets, at the time holders of all space firsts (first satellite launched, the first dog in space, first man, first woman, first spacewalk and many others). The continuous successes that came from the other side of the iron curtain pushed America to go all in and take a step towards the new frontier of space exploration: to reach the Moon. After all, the aerospace capabilities were, in a not too veiled manner, also military capabilities and these missions, though laden with science and peaceful intent, were still a way of flexing their muscles during the Cold War.

The success of the Apollo program marked the end of the race – the USSR had meanwhile lost its chief designer, Sergej Korolev, and with it much of the push that had led them to triumph until then – and the beginning of a period of space exploration done in a more structured and calm way, between space stations and automatic probes.

Now 50 years have passed since the fateful moment when, first the metal feet of the Eagle lander, then the ones of Neil Armstrong and finally those of the pilot of the lunar vehicle Buzz Aldrin, touched the virgin surface the Moon. Since that time the world has not been the same, the impacts of the Apollo 11 mission (and of the following six missions) have been enormous: let us see together how, even after 50 years, even today its legacy resonates in our time.

Technological impacts. To understand how it was possible to send the man to the Moon it is important to understand the context in which the Apollo program was born. Before this, in fact, there were the Mercury and Gemini program missions, which laid the theoretical, technical and above all technological prerequisites for the mission’s success. For over 10 years NASA has worked to develop and implement the most advanced technologies found in many areas, from computer science to physiology, obviously passing through aerospace engineering and touching hydraulics, orbital mechanics and materials science together with many other sectors that today they are part of the technological foundations of our society.

The computer used to assist the astronauts in piloting the capsule, for example, called AGC, Apollo Guidance Computer, was one of the very first miniaturized computers to mount integrated circuits also known as microchips. The company that was entrusted with the development of these devices, Fairchild Semiconductor, was one of the few in the world, at the time, to experiment in that direction. Shortly after, two employees of this company founded their own company, Intel. It is also thanks to the efforts made to make that computer so light (even if, today, with its 32 kg, it does not seem so light, it was a feather compared to the cabinets of hundreds of kg commonly used at the time) if today we can carry one in our pocket always with us.

Making an exhaustive list of all the innovations of the Apollo program would require an article of its own, but fortunately, there is a website that already collects them all: NASA spinoff is a publication that shows all the technologies developed for the space that in one way or in the others affects our everyday life.

Social impacts. Although for a short time, the Apollo missions united the world. 600 million people (out of a world population of 3 billion and a half) spent hours and hours watching television live from literally another world. It was a historic event as if one had the chance to watch Columbus set foot on American soil, and the public knew it. The images of the Earth that rose from the horizon of the moon made our planet small, fragile and alone in space.

At a time when the war in Vietnam and the Cold War dominated the evening news, the images of the first landing on the moon provided a moment of escape and brotherhood. After all, the astronauts, even if under the US flag, had gone there “at peace for all humanity”, as the plaque mounted on one of the legs of the lander says. 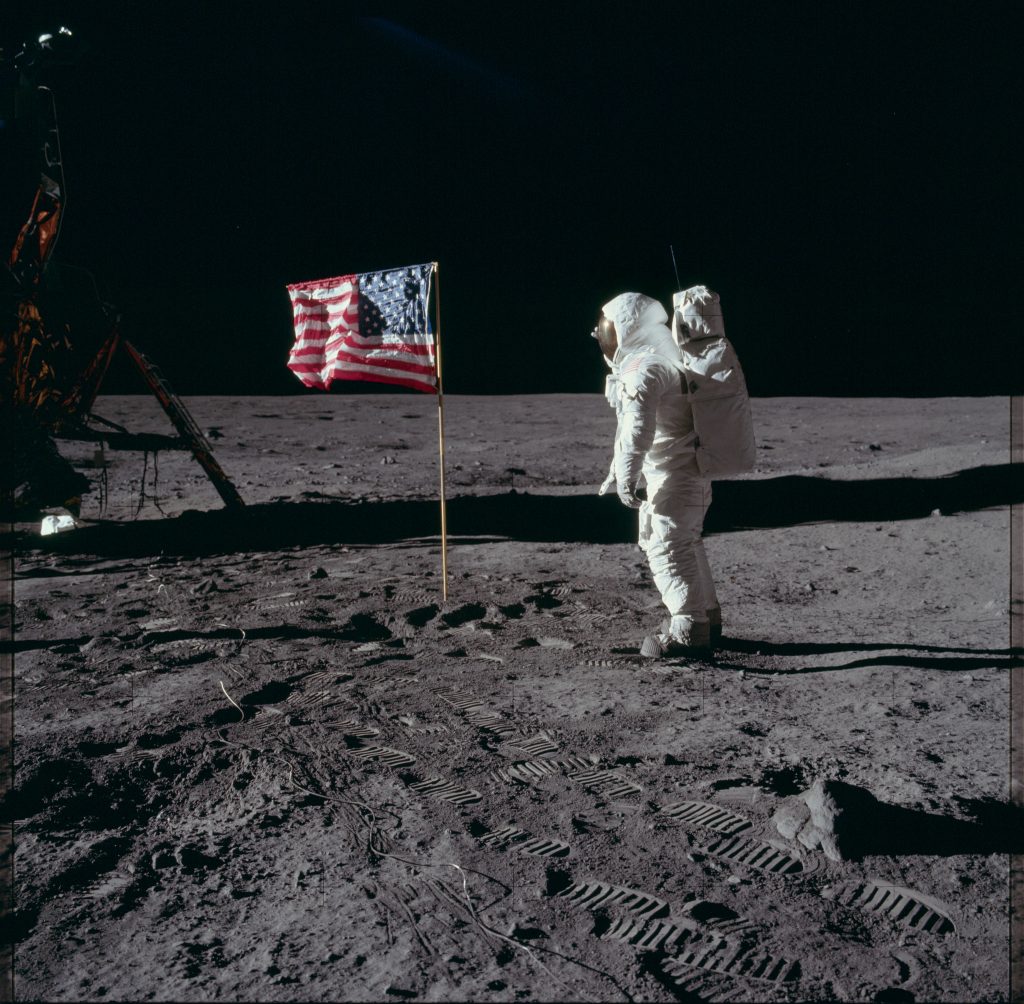 Relive the moon landing. It would be difficult to replicate the same emotions that have spread throughout humanity in those days, but today, 50 years later, technology is helping us. We can try to relive those moments thanks to a web site, which you can find here, which allows us to relive every moment of the entire mission, accompanied by the original audio, photos, videos and every other document testifying this feat. An enormous amount of data and information that allow us to understand how the whole mission took place and that confirms – not necessarily, but that’s it – the historical reality of these missions for those few who still doubt.

For those who are not satisfied yet there is the huge documentary, Moonscape, which similarly relives the whole mission, and finally, for those who want a more immersive experience and have a set for virtual reality, they can relive the emotions of the first mission person thanks to the Apollo 11 VR Experience.

The next small step. Today, 50 years after that fateful day, we find ourselves in a moment of chaotic ferment regarding space. Between private space companies, space agencies from all over the world and new technologies that allow a cheaper, commercial and soon even tourist access to space, there are two objectives: again the Moon, but this time to stay there, and Mars. To reach them this time will not be enough a small step.