Without critical spirit, there is no culture: the words of President Mattarella in Verona

The President of the Republic, speaking at the inauguration of the academic year of the Verona University, underlined the importance of the critical spirit, an indispensable element for growth and progress. 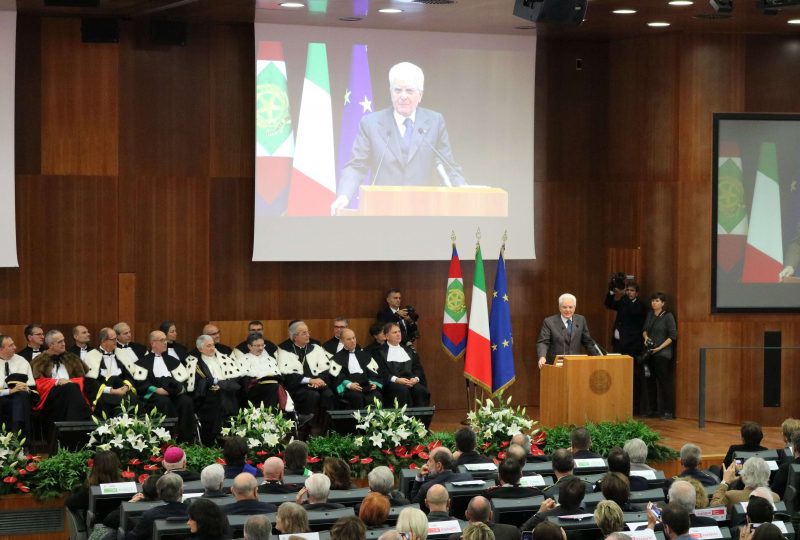 “Open culture, capable of transmitting knowledge and therefore a producer of critical spirit, is an indispensable element for any society that wants to be a protagonist and constantly growing and progressing”. It is one of the key passages of the speech given by the President of the Republic Sergio Mattarella in Verona, during the inauguration of the academic year of the University of Verona on 30th November. Welcomed by the applause of the authorities and the public present in the auditorium of the University of Verona, President Mattarella has spent a long time on the role of culture and on the need of every citizen to be aware and protagonist of the common life.

The ceremony began with the talk of the Rector of the University of Verona Nicola Sartor, who emphasized the importance and value of scientific research produced by the universities, despite an environment and a policy that is not always favourable. “Our actions – said Sartor – have been conducted despite the limitation of the resources of the Italian university system, which clearly appear in the international comparison. We realize that, in our country, education and research for years are not the focus of political attention “.

In this context, science, according to the Rector of Verona, represents a good to defend, a patrimony of all humanity. “In recent years,” he continued, “the superficiality with which news without scientific basis and, frequently, the uncritical assimilation of the same, spread in the public opinion. We do not hide the concern for some effects on the quality of information, especially in the scientific field, from “social media”. In this context, we hope that all professors and researchers leave the “ivory tower” to provide a contribution to the discussion “.

Elena Lucia Zumerle, president of the student council, talk also about critical spirit and active participation. “The university – Elena Lucia Zumerle said – is above all the place where critical reasoning is formed, where at last young people are given the tools to influence reality. It must convey the awareness that each of us is part of a system and that it can affect that system. I would like to mention what Brandeis, judge of the American Supreme Court in 1916, said: The most important political charge is that of a private citizen”.

The President of the Republic Sergio Mattarella intervened in the final phase of the ceremony, before the official opening of the academic year. Returning to the words of the Rector, he said, “The exhortation to take culture everywhere, to spread it, to make it the common heritage of society, is true of great importance”. On the concept of critical spirit mentioned by the President of the Student Council, President Mattarella stressed “Culture and research produce critical spirit. It is their function, their nature. It is appropriate to remember that a culture, or better, a study without critical skills would not produce culture.  […] The critical spirit induces and suggests a leading attitude in the society. This is an indispensable element in any democracy; it is in our Republic, it is because it conforms to the model indicated by our Constitution. I speak of active participation. You must not be passive subjects. Being actively involved in common life is an indispensable ingredient for our democracy “.

The intervention of the President of the Republic ended with a heartfelt applause of those present. A message, that of Sergio Mattarella, which is also contained in the Mission of Impactscool: it is necessary to observe the present and the changes taking place with awareness and critical spirit. Only then can we be active citizens and make the right choices today to take the road to the best of possible future.