Among sensational titles, incredible discoveries, cautious denials and a future that seems exciting, here it is CRISPR-Cas9, the technology that is changing the rules of genetics. 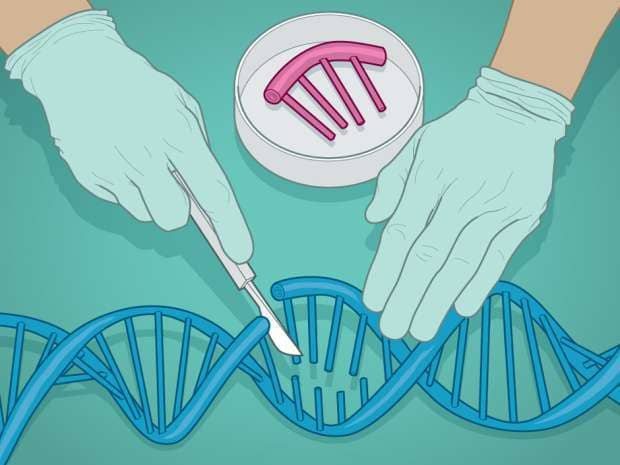 It is not easy to declare for certain who is the scientific father of CRISPR-Cas9, what is certain is that this technology was discovered thanks to a research project that set the goal of understanding how bacteria fight viruses.
Bacteria often have to deal with viruses. Just like humans, we can image a battle scenario where bacteria try to defuse time bombs triggered by a virus: they have a few minutes to defuse the bombs, otherwise, they’ll explode. Fortunately, bacteria have an ace in the hole: CRISPR, an effective defensive mechanism, a sort of immune system which allows it to detect this bomb (the virus DNA) and destroy it.

A key component of the CRISPR system is a protein called Cas9, capable of searching, cutting and then altering/destroying the virus DNA with a highly specific recognition mechanism.

When a virus infects a cell injecting their own DNA into the bacterium (time bombs we were talking about) the CRISPR system intervenes, which allows the bacterium to defend itself against that viral DNA. The question is: how?

It all starts when some fragments of viral DNA are transported to the bacterial chromosome. Then, CRISPR, using these fragments of DNA, can synthesize an exact replica of the viral DNA, called RNA (exact copy of the time bombs). This RNA molecule that is still attached to CRISPR, is associated with a protein called Cas9: that’s how it can start seeking out the viral DNA in the whole cell. When it finds the DNA, the system is associated with the time bomb and allows Cas9 to cut the viral DNA (defusing the bomb).

CRISPR also allows cells to save that information so, if the bacteria meet the virus again, it will be immune, not only for its cell generation but also for future cell generations. Blake Wiedenheft, a researcher at Montana University, has defined this peculiarity of CRISPR as a sort of “cell vaccination card”.

We can think of the CRISPR Cas9-RNA system as a scissor-shaped detonator that can cut DNA. While scientists were studying this system they understood that they could exploit its function of recognition and cutting, to modify or delete specific fragments of DNA and, simultaneously, make genetics dreams and nightmares came true.

CRISPR Cas9, in fact, can be programmed to recognize a specific stretch of DNA previously chosen. Once the cut in the double helix has been made, the cell intervenes and builds again the DNA strand (as our human body does in case of a wound), rejoining the two helices or inserting another piece of DNA. Now imagine that the section we have just cut contains, for example, a mutation that encodes cystic fibrosis, removing this strand we could actually delete the mutation.

CRISPR has already been exploited to change DNA in the cells of mice and monkeys, while in China and the USA scientists have shown that CRISPR can also be used to change genes in human embryos. Some Philadelphia researchers have also demonstrated that it’s possible to use it to remove the DNA of an integrated HIV virus from infected human cells.

The possibility to use CRISPR to modify the human genome implies the necessity to think about some ethical issues: this technology, in fact, can be used not only for adults suffering from diseases but also for human embryos, to “enhance” any human being.

The same researchers are struggling on its utilization: some of them say that many humans have antibodies ready to battle CRISPR-Cas9, so they result immune to this gene therapy, other scientists, however, think that, thanks to CRISPR-Cas9, in the coming years we will be able to cure mortal diseases.

What is certain is that we are facing with a discovery that faces all mankind in front of a big reflection. Will we use CRISPR Cas9 to cure diseases or will we become human designers?