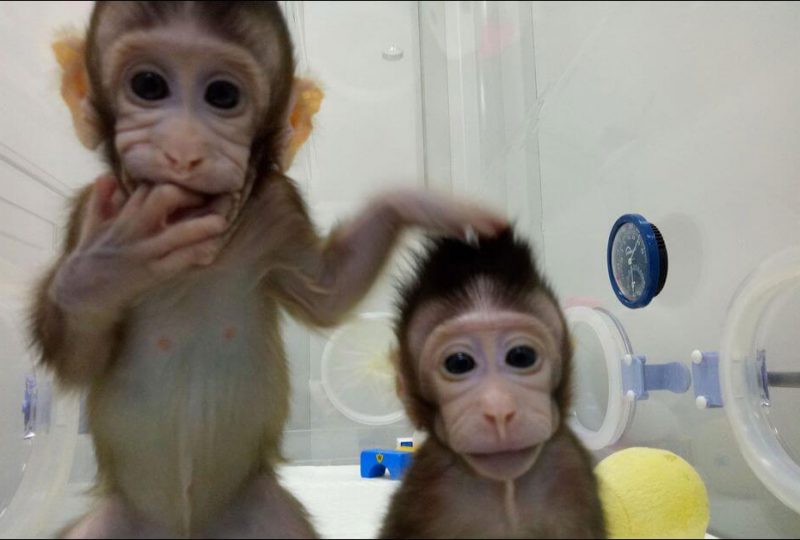 Students at the final exam in high schools found themselves faced with a complicated, however fascinating, theme: bioethics were, in fact, among the traces proposed for the written test. We discussed this choice with Paolo Benanti, expert in bioethics and technology ethics.

The experiment of the Chinese Academy of Sciences that lead to the clonation of the two macaws Zhong Zhong and Hua Hua, whose news came last January through the magazine Cell, didn’t go unnoticed. So much so that even at the final examination in high schools, whose written tests ended at the beginning of this week, bioethics made an appearance among the traces of the first test, that asked the students to try their hand at a short essay about the “bioethical debate on cloning“.

We discussed about this with Paolo Benanti, a Franciscan brother of the Third Order Regular, who is an expert in ethics, bioethics and technology ethics. “To say that we are a photocopy of an already existing DNA, as in the case of human cloning, means taking away the unknown of our existence, which is the basis of freedom” – explained Benanti – “If, with human cloning, we condemn ourselves to be lives already experienced from the genetic point of view, we risk to erase the root of human freedom”.

Bioethics was one of the main themes of the last final exam in high school. In your opinion, is it important for students to begin to examine these issues critically? Do they have the tools to talk about it?
It’s true that the issues concerning bioethics are considered to be somewhat “hot” topics, the discussion of which requires good argumentative skills and medical, biological, philosophical knowledge and an approach to the world of law. If we limit ourselves to think about bioethics in these terms, obviously a high school student who is preparing to face the final exam doesn’t have these skills. However, in recent years bioethics has become an increasingly topical subject: it arrived more and more often on the pages of newspapers, acquiring both the advantages and the limits of public disclosure, such as the ability to reach more people, through a series of news and accurate information that create opinions and debate, but disengaged from any type of training. For this reason, the fact that the school system is starting to deal with it is a positive sign: students are being directed towards a research that can also be a mediator of the truth, and from this point of view I would say that the landing of these themes, first of all of bioethics, at the final exam is admirable.

In recent years, with the evolution of technology, the debate on bioethics has expanded. Compared to the beginning, when cloning (with the case of the Dolly sheep) was at the main issue, today the discussion touches many more themes, some of which are closer to the kids and to what they see every day.
If we take into consideration the lexicon of bioethics, that is all the terms related to this theme, today we have about 400 entries, while twenty years ago they were 20 or 30. To give an example of the evolution of these themes, we can take in consideration two cultural movements that move around bioethics, which today are particularly widespread and which intercept this theme in a very important way. At the end of the 1960s two movements were registered, one in Europe and one in the United States. In the US, young people began to challenge the status quo, creating their own culture of knowledge founded from below – the hacker culture. Hackers created their knowledge in the computer world, which was just beginning to appear among the programs of the universities, not depending on the large producers, but creating alternative solutions based on the information in their possession. It can be said that this type of culture, from which some of today’s great IT companies were born, is the inversion of knowledge, which doesn’t come from official funds but is self-produced within narrow circles of people.
At the same time, in Europe and especially in France there was a student and youth revolt, in which kids were identified for the first time with something different, and in a conflictual way, compared to adults: body art is born, with which the body becomes place of identity and protest.

What do these movements have to do with today’s bioethical debate?
50 years after ’68 these two movements converge and give rise to biohacking: more and more often there are experimenters of biological issues on their body that operate like the hackers of the past, that is, creating undetected under-therapies from above using them on themselves. So they create genetically altered substances, if they inject or install devices, altering their body. So, modifying the body, following information that is not related to any medical knowledge, but in a very experimental way, it is something that arouses a lot of young people. Here, then, that the theme of maturity on bioethics, with reference also to cloning, in this context becomes very current. A very mild form of biohacking, for example, is the culture of tattoos: it is a change in the aesthetics of one’s body. Nothing organic is modified, but the issue is the same.

In the exam test, a reference was made to the fundamental charter of European Union rights where, in a more or less direct way, these issues are mentioned. Isn’t the time come to update these documents, given the explosion of the discipline, and expand the debate by involving lawyers and politics?
When the term bioethics was coined in the USA it was decided to use, not surprisingly, the plural. This is to underline that the impact on the life of this discipline involves many sectors and many disciplines: biology, medicine, philosophy, law. If the 19th was the century in which we declaimed human dignity, the tragedies of the 20th century told us that if this dignity doesn’t translate into human rights, it is possible to trample it and erase it in a moment.
In light of this, it is clear that this horizon of protection must necessarily be part of the European legal horizon. Let’s not forget that the greatest battles of the 19th century were just to say “we are all the same”. Genetic editing, cloning, and manipulation of DNA could actually, for the first time in the history of mankind, create “different biological offices”. So, it’s clear that the question of rights is central, but the rights are born only from a construction of social dialogue: this should be a task not only for the school but for all, we need to open the squares of confrontation and create spaces for discussion in which the different skills can establish a common law.

Limiting science seems anachronistic. But it seems that science and citizens, even those with decision-making roles, travel on two different tracks and with different speeds. Is it therefore necessary to put limits on science to safeguard the person? Are there aspects of the “human” that must be considered untouchable?
When we talk about cloning or genetic editing we are talking about research financed by individuals, patents and companies. Therefore, the market logic must be added to the research fields, and the distance between technical and moral possibilities must be taken into account. Some argue that a sort of ethical neutrality is needed in the world of scientific research, so a researcher would have every form of autonomy or moral freedom, as it is subject only to the laws of the sector in which he/she operates. Morality is perceived as a limitation to scientific freedom, which precludes the possibility of obtaining better results or new discoveries.
There is, however, no ethical neutrality: to give an example, if we do a research that benefits only a few wealthy people we have already made a choice that is not ethically neutral. It is the task of ethical reflection to accompany technical and technological research. Then the intervention of genetic engineering or cloning of which we speak, made possible by new scientific discoveries, must underlie this question: is it licit or illicit? It’s licit if it favors man’s freedom, while it’s illicit if it denies the dignity of man himself.

What are the biggest ethical challenges we will have to face?
I would say that there are essentially three challenges we will have to face in the future.
The first is biopolitics, a new form of power that can’t be left to itself: it must be regulated so that there is no absolute power to say which is the genetic heritage that has the right to live and exist and which is not.
The second big challenge is a commercial one. Can we patent human life? And how can we reconcile the need for patents and the universality of life, which is not in the condition of being patented by anyone? The tension between private and public, between property and the impossibility of property is something that will animate the discussion of the coming years.
The third great challenge is on the identity of man. If life becomes a technical thing, that we can almost photocopy, that we can manipulate as we want, what does it mean to be human? The real big challenge here is not to understand what and how much technique can be applied, but to understand what is human.