Immersive technologies are increasingly being used to identify and treat mental disorders. We talked about it with the researcher Alice Chicchi Giglioli 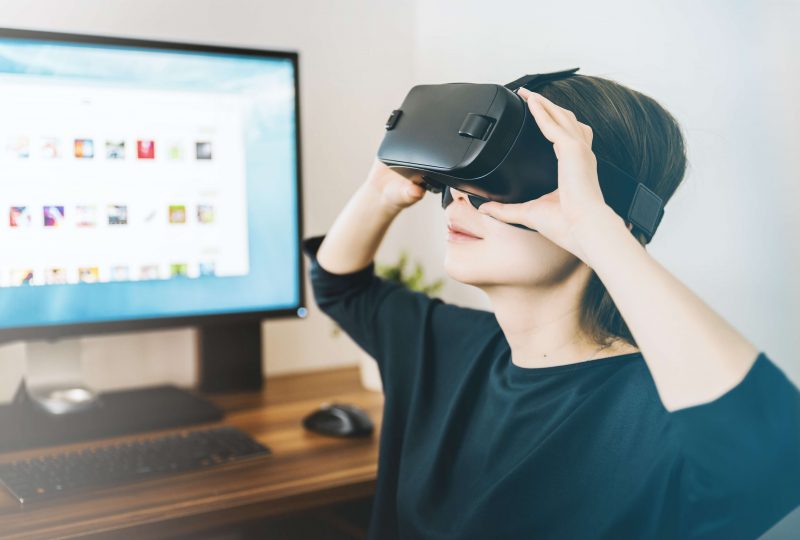 There are many immersive technologies’ applications in the medical field: from the use of virtual reality for the training of surgeons to augmented reality as support in the operating room, up to their use to offer support to patients to deal with the disease. This is the sector in which TOMMI, a startup we already covered in this Magazine, operates. The use of these technologies, however, is increasingly common in the field of psychology, that uses it to identify and address mental disorders.

It is precisely in this sector that Alice Chicchi Giglioli works: she is a researcher who works in Milan and Valencia. After starting her university career studying Languages, later abandoned but which allowed her to face the challenge in Valencia with greater confidence from a linguistic point of view, she enrolled in Psychology and deepened her studies with a Master’s Degree in Cognitive Sciences and Decision Making Processes. After approaching the world of technologies applied to psychology and through an internship, in 2015, she participated in a competition for a research grant reserved for foreigners in Valencia, an important center of the sector and that collaborates with the Milanese research teams for over 20 years.

Today Alice is engaged in a project that aims to validate a new psychological model through the use of virtual reality. We interviewed her to find out more about her research and to talk about immersive technologies applied to psychology.

Tell us about your research …

The study aims to validate a new psychological model, written in 2007 by a Swiss – German researcher and therapist, Klaus Grawe, who died before being able to validate it.

This model is very interesting because it tackles almost all mental disorders in a similar way. In fact, it considers them united by a lack compared to four basic psychological needs: attachment, self-esteem, orientation and control, maximization of pleasure and minimization of stress.

The mental disorder, therefore, occurs with the onset of one or more shortcomings with respect to these transversal components.

How were immersive technologies used?

This model, now in the process of validation, has been developed in a virtual reality environment: we have created a serious game, through which these four variables are measured. Once validated, the objective will be to also identify a treatment, to be submitted always through the use of virtual reality that will be used to fill a lack towards one or more of the basic psychological needs mentioned above.

How are these technologies intervening in the processes of diagnosis and treatment of mental disorders?

All the projects in which they are involved are similar for their use of technologies, as well as for their approach. Today in psychology it’s quite common the use of questionnaires, often standardized, for the detection of a mental disorder in a patient. These measures, called explicit, often lead to biases, meaning changes in results, due to various aspects including expectations and prejudices against mental disorders. To simplify, it happens that the subjects answer “what they should answer” and not what they actually feel, thus offering us only a partial view of their state of health. The idea of our approach, on the other hand, is to implement explicit measures with implicit real and behavioral tools, to which are added physiological measures, which then offer a physical feedback given by the patient’s reactions to stimuli.

Can you give us a concrete example?

We have just finished developing a reality that allows us to measure the cognitive functionality of a subject from a kitchen task. The data in our possession, in fact, tell us that there are people who are able to perform standard tasks, but then in reality they cannot have adequate cognitive functionality. The kitchen was chosen because it includes several aspects: attention, work planning, memory and a range of other skills. The idea is to create tools to verify, in a context of immersive reality, the real cognitive functions. The same experiment was replicated with healthy people and patients with mental disorders, in order to identify also parameters to be used in the evaluation.

This same model can be replicated and adapted also to different subjects and needs.

What are the difficulties in using and validating this approach?

In general, we need a lot of data for validation, so we are now expanding all the experiments so as to involve a growing number of patients. Fortunately, in Valencia there are already many private centers that use these systems and that allow us to have more data at our disposal.

Let’s take a step back: how are virtual reality studied and then created?

The work is divided in different stages. At the beginning a conceptual design is made by psychologists. From the psychological construct, hypothetical real situations are thought where the construct can bring out the behaviors we want to study.

For the study we are about to validate, we have used a methodological tool called “Evidence center design” and is used to construct situations on a conceptual level. This happens through a model that must answer 3 questions: what are the psychological aspects that I want to measure? What are the behaviors that can make me understand these psychological constructs? What situation can these behaviors bring out?

But there are also other approaches, such as the “User center design”, which instead starts from users and the results of some pilot studies.

How is your serious game built, for example?

It provides seven Avatars, each of which has specific characteristics and behaviors. Starting from these we have created different real situations, both negative and positive, in which it is possible to bring out in the patient the psychological aspect that we want to study. So, you need to write a real script, which also includes the evolution of different situations.

And what about the development?

We, psychologists, work closely with the developer, who has the difficult task of making real all the conceptual work that has been done. Need to be precise in the directions and work side by side. Usability tests are carried out with non-research subjects to try out the virtual reality we have created. Their opinions are important to correct any errors related to use. The last step, then, is to specify to the developer what data we want to collect and how to classify them. Once this last step is completed, we also carry out other usability tests and only then are we ready to start experimentation.

What are the next frontiers of the use of this technology in the psychological field?

The ultimate goal is to arrive at a personalized psychology. Right now, technology does not allow us to customize everything and we psychologists are forced to make decisions that somehow can condition the patient. Our dream would be to allow the user to build his virtual reality in real time, based on physiological values and behavior. In this way each subject would be subjected to specific stimuli, based on the signals it sends. These are called adaptive environments and are the ultimate goal we want to achieve.

To do so, however, we need a virtual library of immense stimuli, many subjects on which to test the system to consider all the variables and technologies that, to date, are not yet “ready”.

What are the risks of using immersive realities in the psychological field?

At a clinical level I do not see any particular risks. The physical problems related to the use of these technologies, such as the sense of vertigo or nausea, have been overcome. The advantages are many and the most important is to be able to reach a large part of the population: the depression will be, within a few years, the second most widespread disease in the world, but the stigma linked to mental disorders pushes many people not to ask for help. This technology, instead, could make the presence of the therapist unnecessary: it will continue to be there, but its role will change, it will be able to monitor patients remotely, read the data and plan the virtual reality used for diagnosis and treatment. The only risk, therefore, is that the direct doctor-patient relationship is lost.

Behavioral Economics at the service of the school

Sorry this entry is only in italian.

The (good) driver rating and the social credit model

Driving in the city during rush hour can be a...

News of the week selected by Impactscool – Novembre 16th